A rest day provided time to visit the laundromat and to walk around photographing the delightful city of Leon.

Who knew that Hogworts was here in Northern Spain? 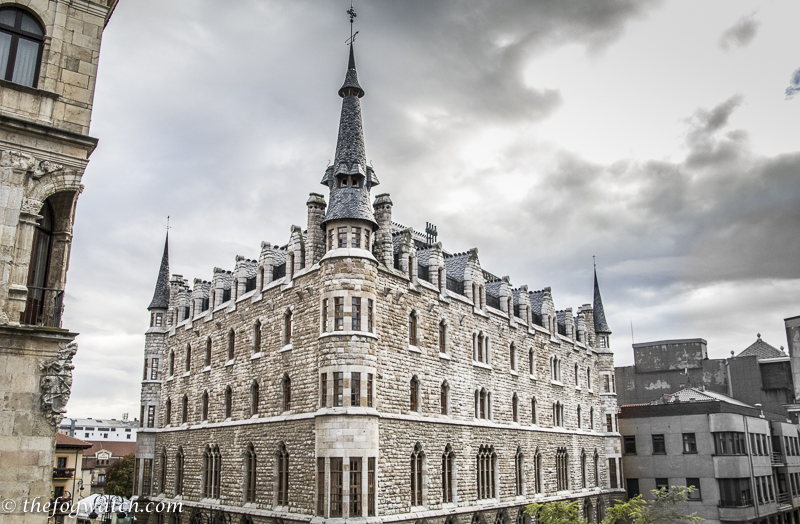 The Casa de Botines was designed by Gaudi in an exaggerated Gothic style like a Disney caricature of a medieval castle. It was Gaudi’s homage to Leon’s architectural history. As he was completing the Episcopal Palace in Astorga, Gaudi was approached by his friend and patron Eusebi Güell with the suggestion to build a residence in Leon. According to Wikipedia, Simón Fernández and Mariano Andrés, the owners of a company that bought fabrics from Güell, commissioned Gaudí to build a residential building with a warehouse in Leon. The name came from that of the company’s former owner, Joan Homs i Botinàs. The building was bought in 1929 by the Savings Bank of Leon, Caja España, and was kept unchanged from the original floor plan. Interestingly, the stone statue of St George and the dragon, positioned by the entrance turned out to contain a lead tube with the original plans for the building signed by Gaudi himself, along with some press clippings of the day. This ‘time capsule’ was discovered in 1950 during renovations on the building when the statue was moved.

We checked out the shops and hung out on the square, before indulging in the great Spanish tradition of the siesta.

Leon has a long history, dating back to pre-Roman times. Indeed the area has been occupied, like so much of Northern Spain, since the early palaeolithic period – not to be confused with the similarly-named diet. To find out more, it was time to visit the Museo de Leon. 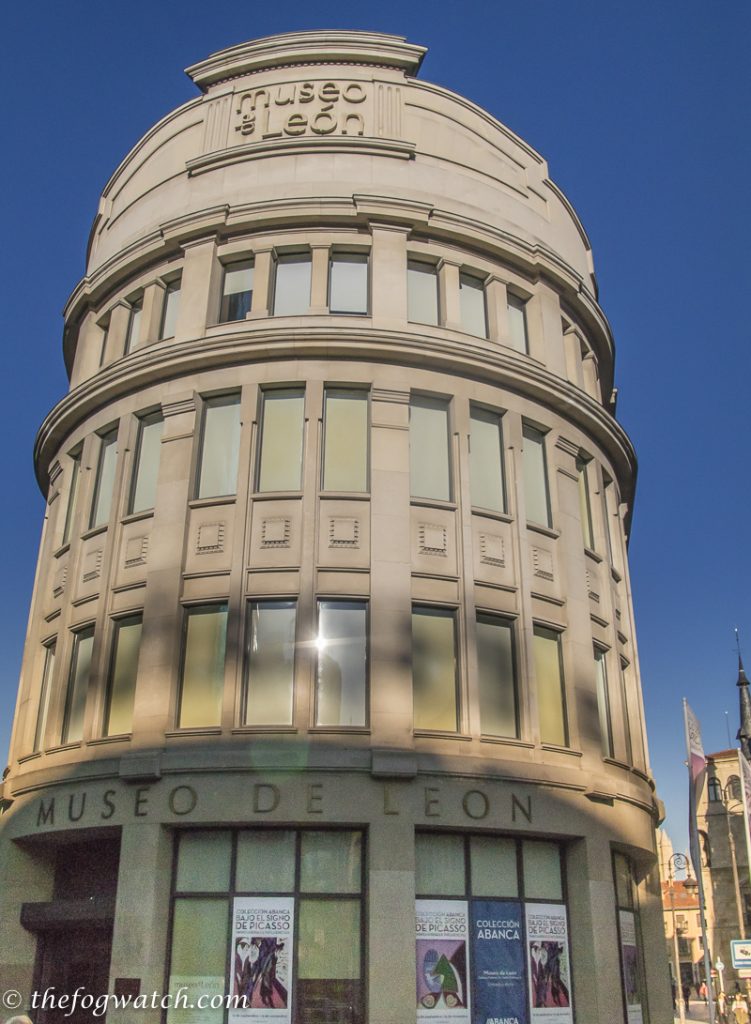 The modern museum is very informative, with commentaries in Spanish and English – and some great insights into the culture that has led to modern Spain. More on that in a moment, but first, there was a surprise in store – an exhibition of C20th artists, including works by Dali, Kandinsky, Miro, Braque, and of course Picasso, displayed along with their Spanish contemporaries from the post-Impressionist period. 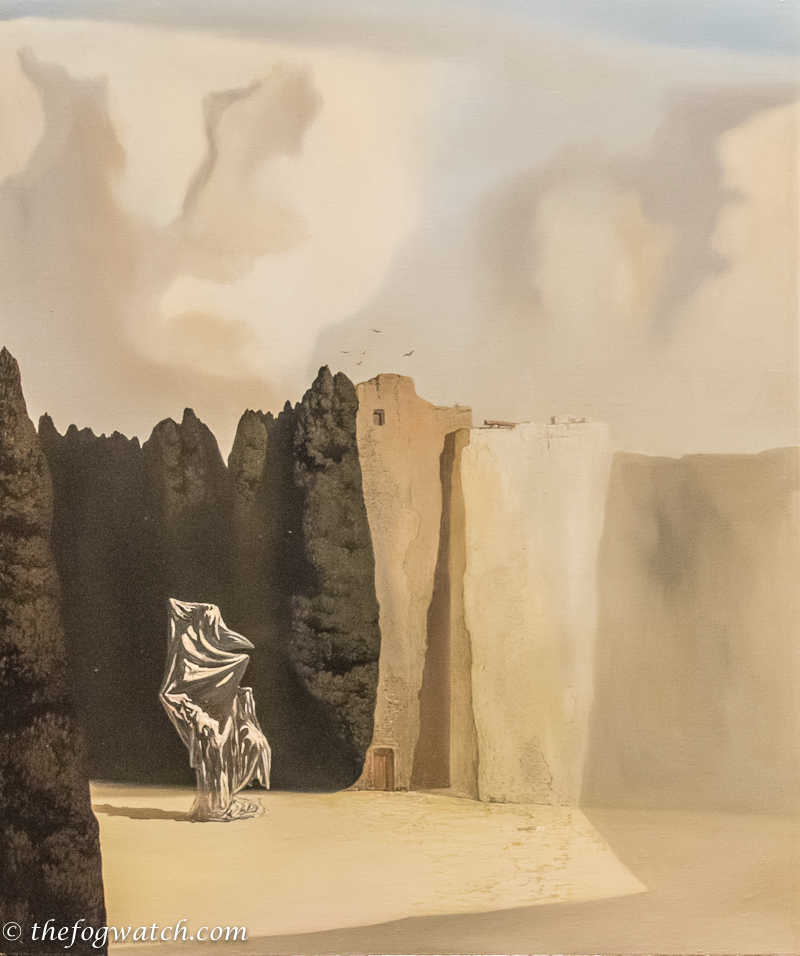 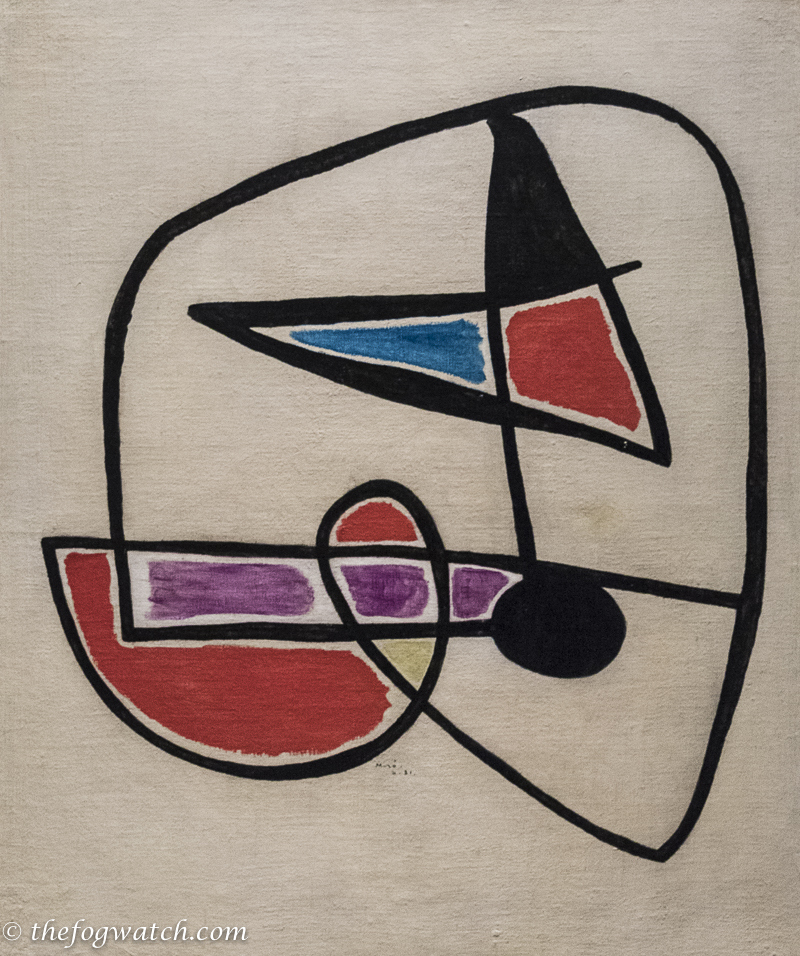 An amazing exhibition for a regional gallery! An exhibition like this would have been a blockbuster in Australia, but we were almost the only visitors.

Other floors covered palaeolithic, neolithic, Bronze-Age, Iron-Age, Visigoth and Roman finds were well displayed – especially the Roman material with finds from around Leon and Astorga. 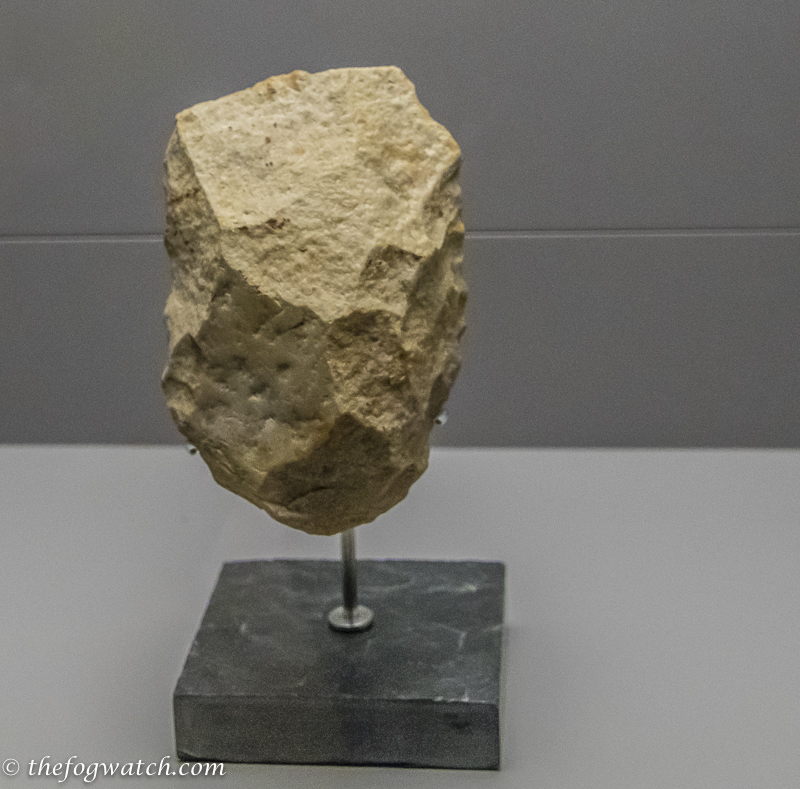 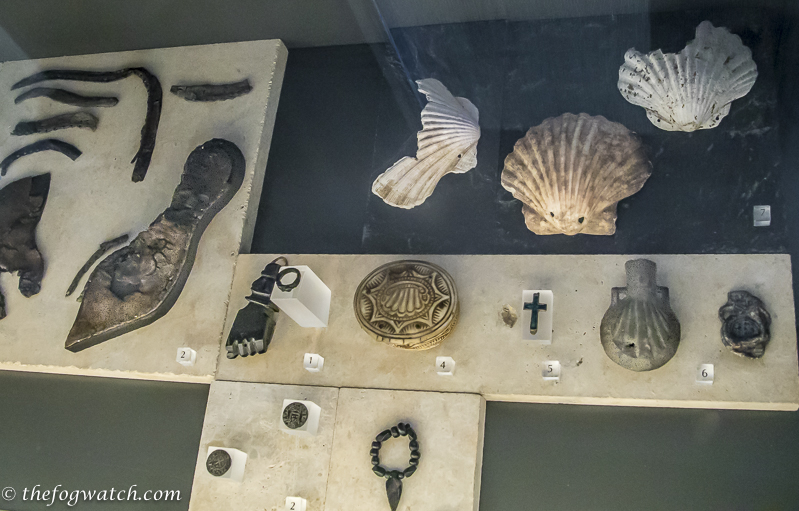 These pilgrim artefacts are from the medieval period – the shells are the same today and readily recognisable. The other pieces are pilgrimage souvenirs, and parts of a leather shoe found along the pilgrimage route – just as boots are found today!

We were struck by the insightful commentary provided on vernacular Leon society – that resonated with our own observations. As pilgrims, we have been passing through towns and hamlets that seemed to preserve their medieval life and culture, albeit with the overlay of TV, mobile phones, cars, and John Deere tractors.

In many ways, these places seemed untouched by modern society, despite the presence of tens of thousands of C21st pilgrims passing like ghosts to appear but briefly, before passing on through. We were constantly struck by the complete absence of people in most of the towns and villages – although occupied, we often found the streets empty of locals, save for the occasional desultory dog.

The museum commentary discussed the conservatism of Northern Spain as having deep roots:

“In the C16th and C17th the society of Leon began to suffer from its distance from the country’s power centres, while a prevailing lethargy among the common people was scarcely altered by holiday celebrations, epidemics or agricultural crises. The population, residing overwhelmingly in small towns and hamlets, and dedicated to farming or handicrafts – with a minority of shopkeepers, steadily diminished in size. In sum, it was  a stately and prosperous society, parochial and drowsy, clinging to its beliefs, with an exaggerated sense of community and to the certainties of life that were altered only by fate or by ceremonies.”

This resonated with our observations. Perhaps it has to do with generations of people living in small self-sufficient communities, suspicious of outsiders and outsiders’ ideas, and with little real contact with the outside world while maintaining strong traditions, and to which change comes slowly, after a long test of time.

“The great majority of the people of Leon have always lived in rural settings, cut off from many of the events and trends [mentioned elsewhere in the museum]. Until very recently, nearly all lived lives very similar to those of their remote forebears. The idea of change and progress must be embraced with reservations and held up to the light of tradition, which sometimes is a burden, and at other times is a safeguard.”

We saw this borne out again and again on our journey. There were few signs of modern agriculture and it seemed that most villages were surrounded by small-holdings passed down through generations. But there is a problem. Many of the young people, exposed to modern education and the internet have a broader perspective, and increasingly are moving away from the villages and towns to seek their fortunes in the cities. In some cases, whole villages have been deserted and are falling into disrepair.

It was time for a paella and a re-pack ready for tomorrow’s walk and the continuation of our Camino.