This morning turned out to be Spain’s National Day and everything was closed for the public holiday. It rained for much of the day, so we took the toy train ride to take in the tourist experience. It was a delightfully absurd way to see the city. And the English language commentary was very informative as we wove in and out of the narrow medieval streets. 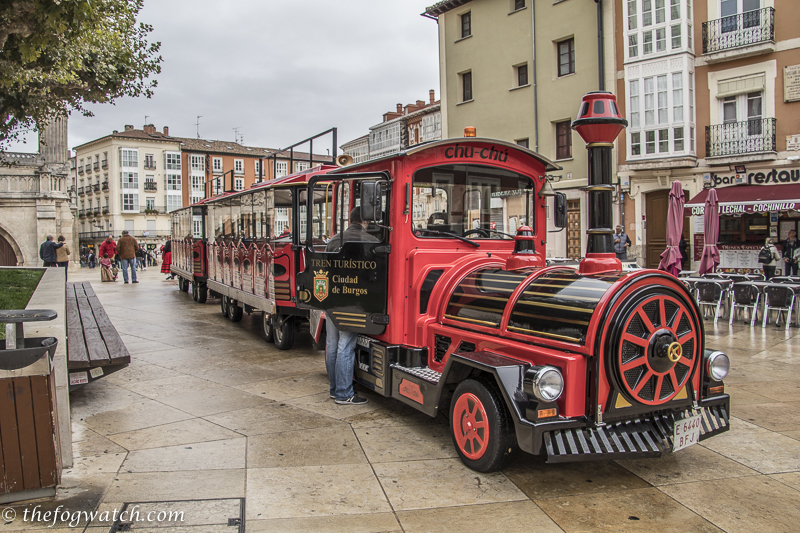 A good part of the medieval city wall remains intact and adds to the sense of history. It also brings home the reality of just how contested this part of Spain has been over the past thousand years. 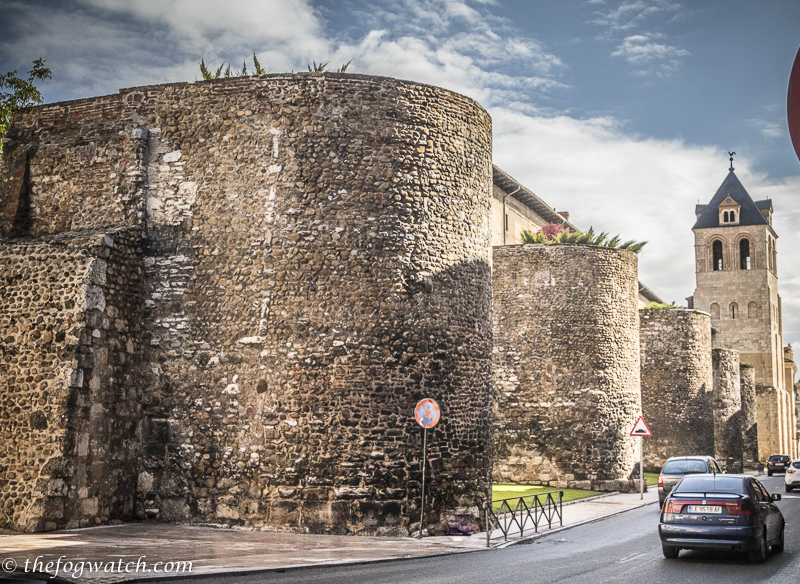 The Santa Maria arch was the most important gate to the city throughout the Middle Ages. It also functioned as the Town Hall until the end of the C18th. The Arch of Santa María was originally built in the 14th century as a triumphal arch in honour of Emperor Carlos V. It was given a face-lift in the Renaissance style by Francisco de Colonia and Juan de Vallejo starting in 1536. It was finally completed in 1553 with the addition of a series of statues carved by Ochea de Arteaga.

We headed off for lunch and then it was time to visit the Cathedral. The Cathedral of St Mary/ Catedral de Santa Maria – was consecrated in 1221. And it is magnificent! The Cathedral is built in the French Gothic style, with major changes incorporated in the C15th and C16th. 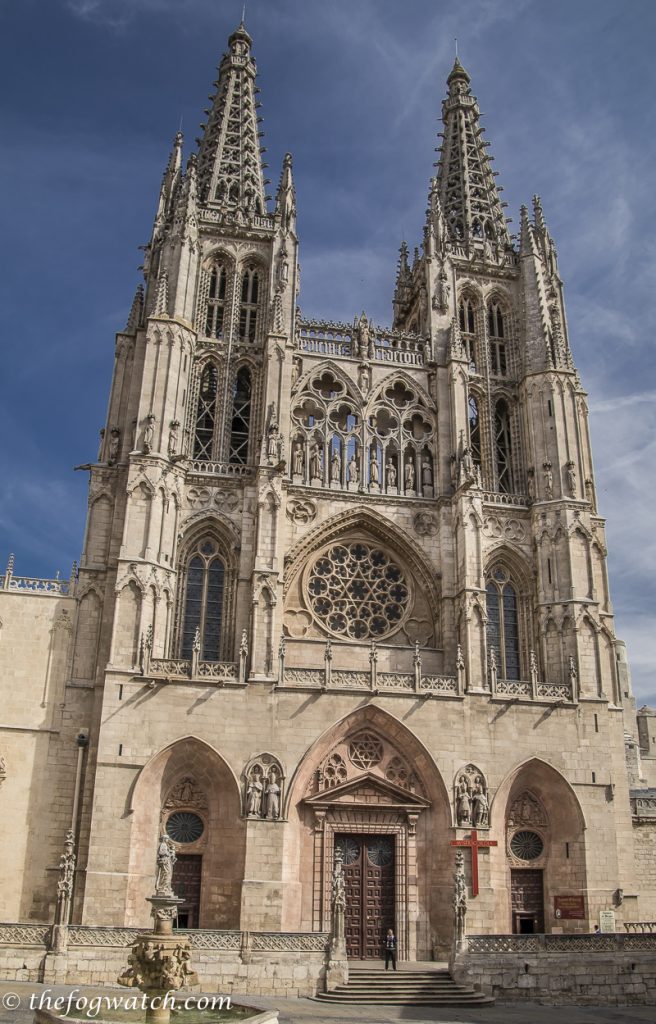 The Cathedral houses the tomb of El Cid and his wife Doña Jimena.

Inside the entrance to the Cathedral, there is a clock chimed by a grotesque automaton known as Papamosca – the Fly Catcher – and he opens and closes his mouth with each chime as though catching flies. 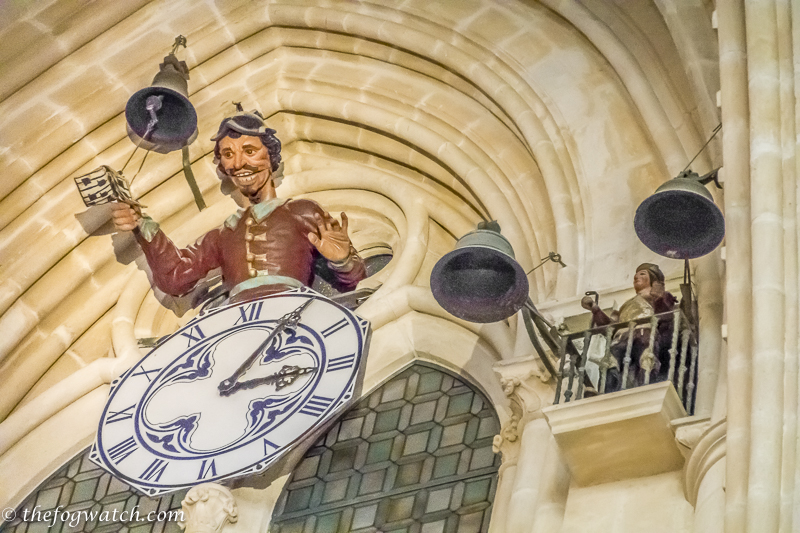 There are many side-chapels in the cathedral, each rendered in a different style and each breathtakingly beautiful in their own right. 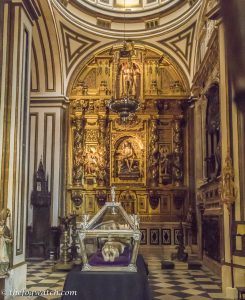 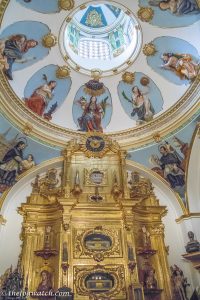 Outside was a fountain – an ancient and most unusual fountain designed and constructed in 1663 by the Cantabrian artist Clemente de Quintana with water flowing from phallic nozzles, figures astride giant fish and surmounted by 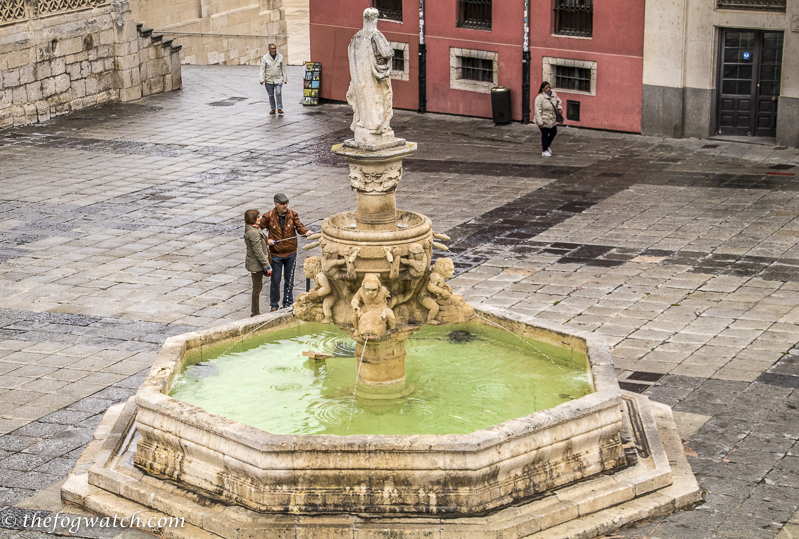 Between the lower figures riding fish or dragons, we see other figures splayed wide. I wondered if perhaps this was symbolic of fertility drawing on pre-Christian iconography. 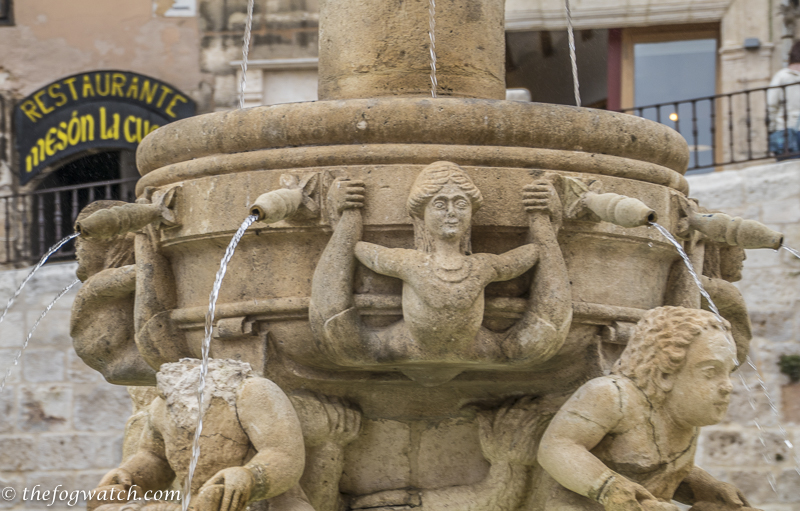 On the square outside the cathedral, we found a bronze statue of a tired pilgrim – so we sat down to join him… 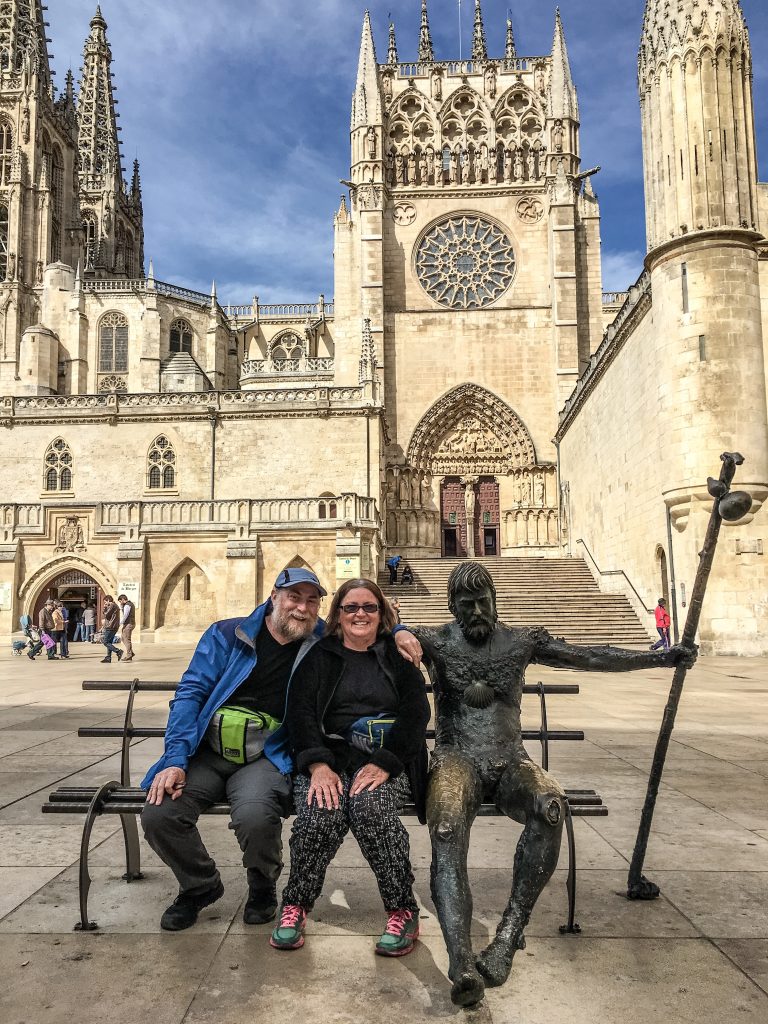 We found another pilgrim statue at the Municipal albergue – depicted tending his blistered feet. 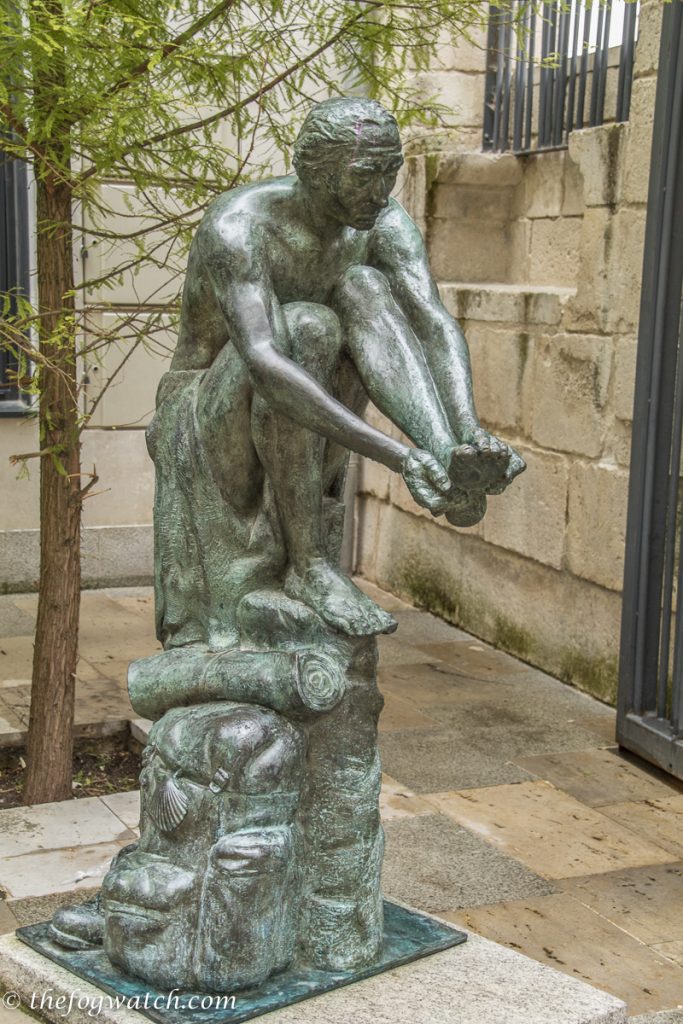 El Cid – also known as Rodrigo Diaz de Vivar – was Prince of Valencia and reigned from 1094-99. The Moors called him El Cid, meaning ‘the Lord’. But the Christians called him El Campeador, or Great Warrior. It seems he was born in Vivar near Burgos. And there is a dramatic statue of him on a charging horse near the city portal. 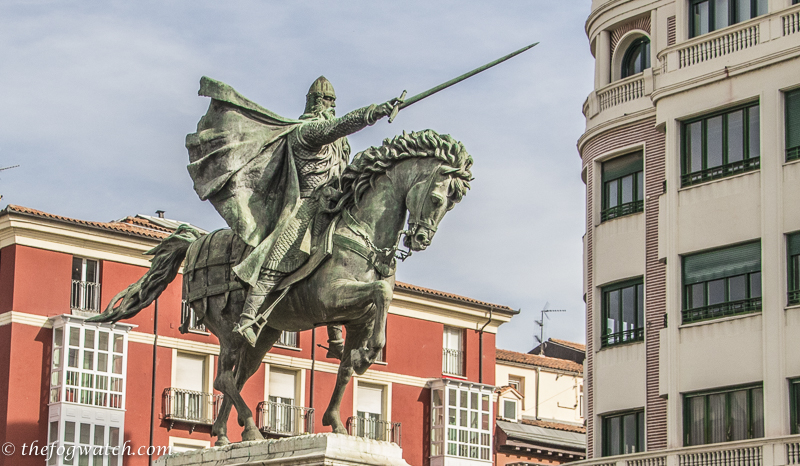 He was King Sancho’s standard bearer and led the military campaigns against Sancho’s brothers – the rulers of Leon and Galicia, as well as the Moslem Andalusian kingdoms.

After King Sanchos was murdered, El Cid was exiled and actually fought for the Moslem rulers of Zaragosa. Later, returning to fight for Sancho’s brother, he ultimately won rule over Valencia. Settling there he ruled fairly, loved by both Christian and Moslem subjects.

He remains a popular folk-hero today in Spain.

This city of 180,000 has a long history. The area has been occupied for around 800,000 years. By the time the Romans came along, they found a substantial celtiberian city – a celtic-speaking people who occupied the Iberian peninsula likely dating back at least as far as the C6th BC.

Today the city is modern and thriving, with a strong respect for its past and for its role as a major stop on the Camino. 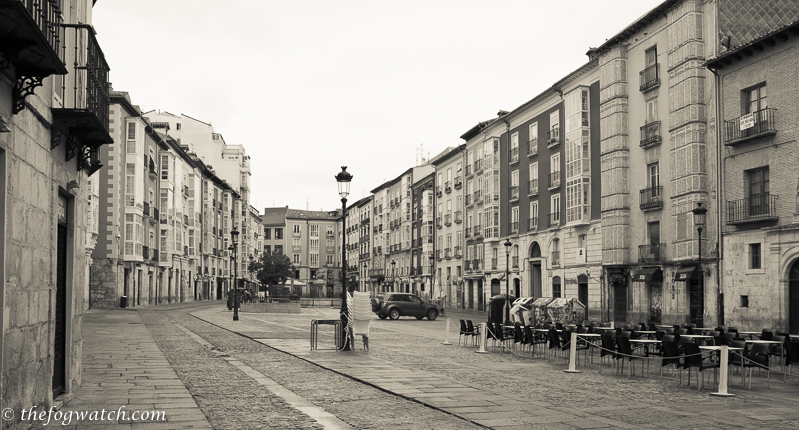 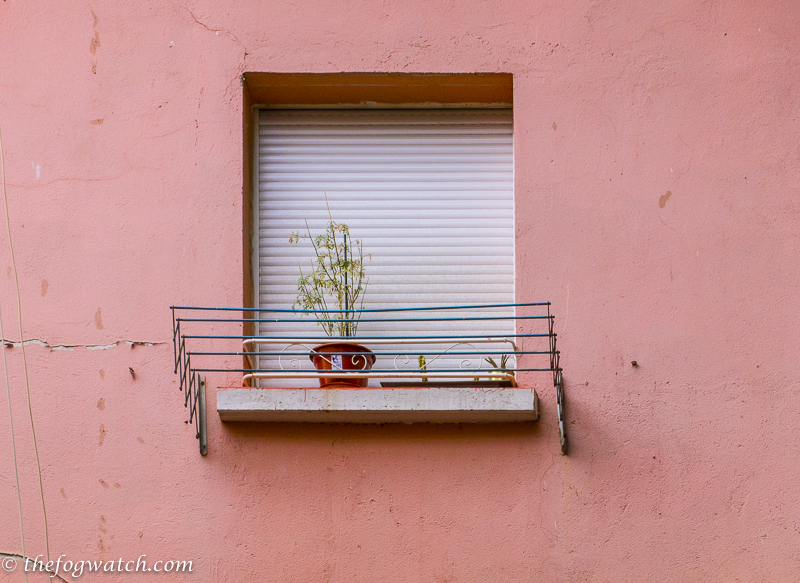 And they were very aware of global issues – and in many places we saw stencil graffiti. This one was welcoming refugees 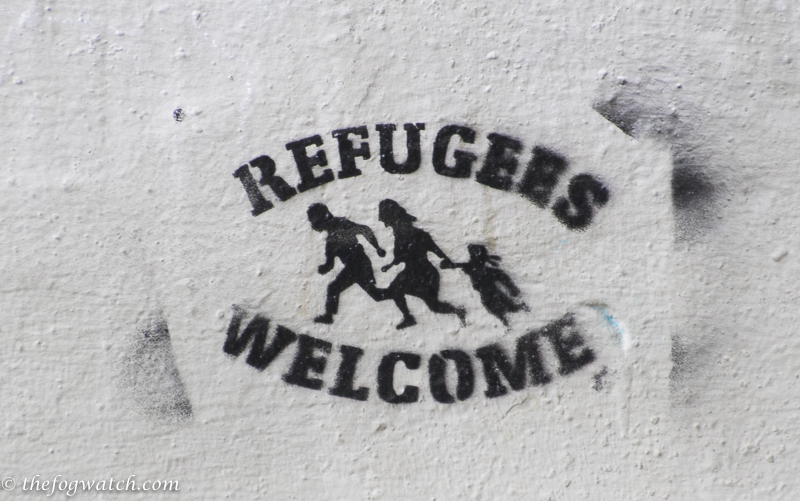 Then it was time for dinner – a delicious Lentejas Medievales (Medieval lentil stew) followed by steak and dessert accompanied with a nice drop of vino tinto. And so to bed. 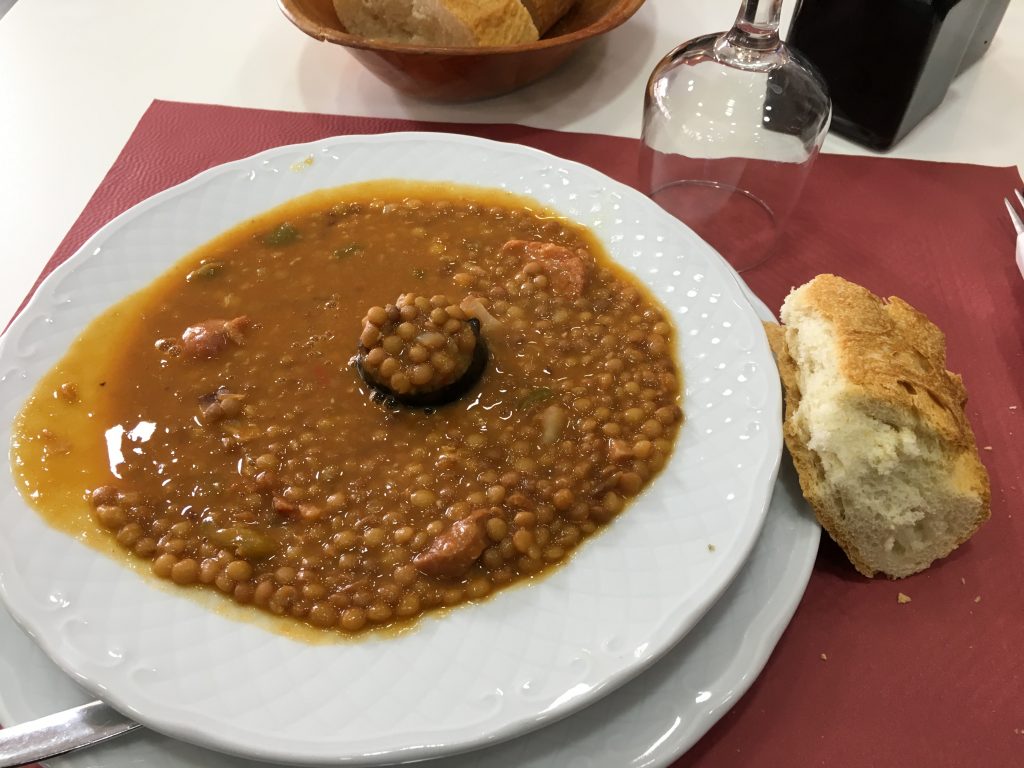 We had a serious decision to take. Having been travelling for almost 6 weeks before starting the Camino and with a 90 day Schengen Zone visa we were getting concerned that at our current pace we would not make it to Santiago before our visas ran out. With the last 100kms counting toward the Compostela, we did not want to risk failing at the last few kilometres. So it was hard decision time.

If we took the bus across the Meseta to Leon we would make up about a week’s walk which would put us back on target to complete on All Saints Day (1 Nov). And so we resolved to take the bus tomorrow. 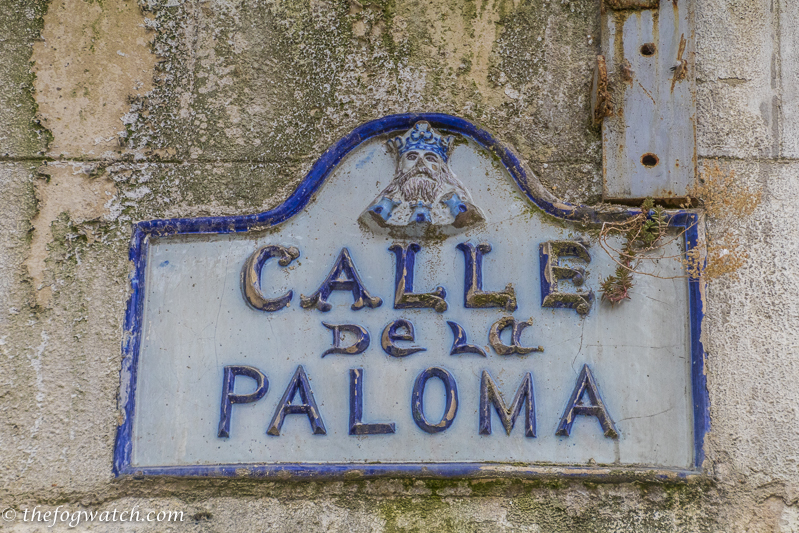 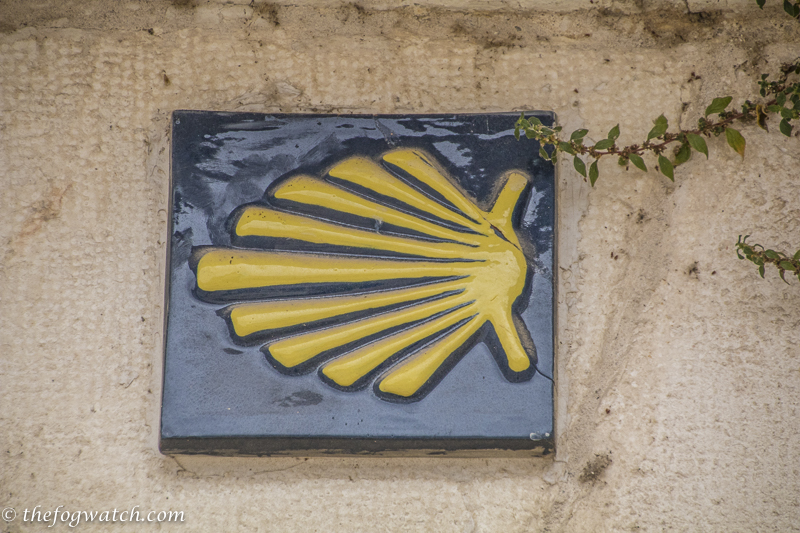