We left Morgade after a hearty breakfast, and farewelled our Belgian friend. We were heading for Portomarin, often spelt Portomarín with the accent on the ‘i’. 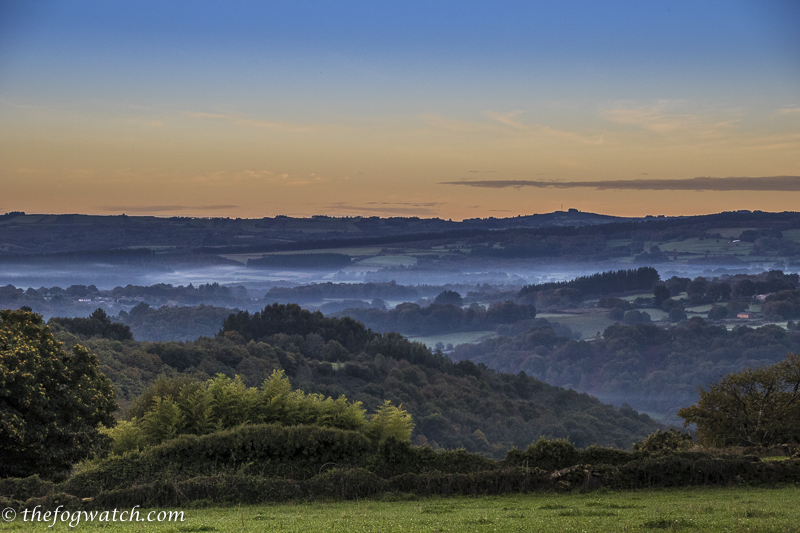 Off in search of coffee, we passed through amazing tracks lined with ancient dry-stone walls. 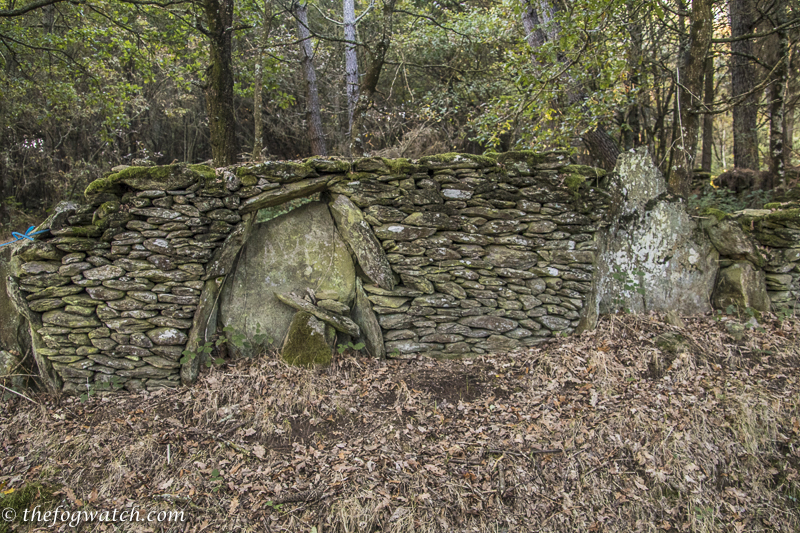 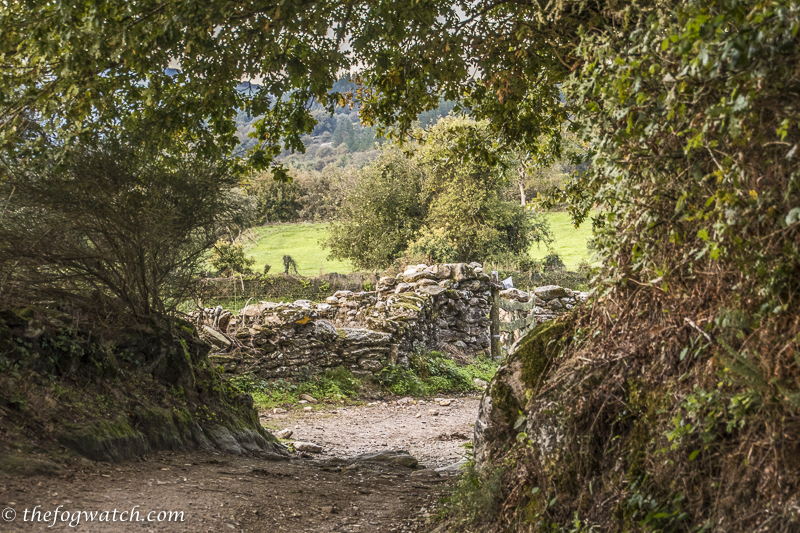 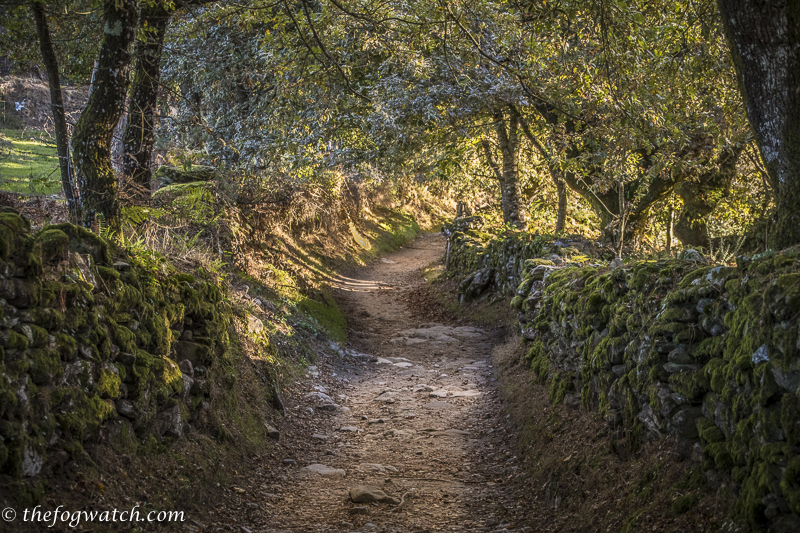 Sometimes we saw strange glyphs in the rocks where someone had painted into the weathered depressions as though they were mystical signs. I wondered if it had been the work of the ‘shaman’ pilgrim we had met at an earlier part of the Camino. Or perhaps it was a local youth having some fun with the pilgrims 🙂 One could easily imagine a modern ‘Indiana Jones’ or perhaps someone might imagine a gift from an alien civilisation. I just think someone had some fun painting into a weathered depression in the rock, leaving it for others to imagine whatever significance it might have for them. 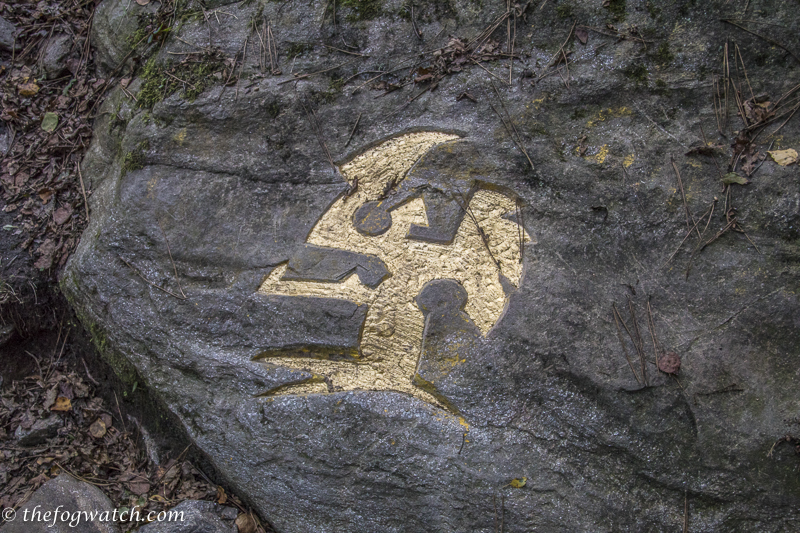 We passed through several hamlets that turned out to be just collections of farm buildings – mostly dairy farms – and the smell was… agricultural! 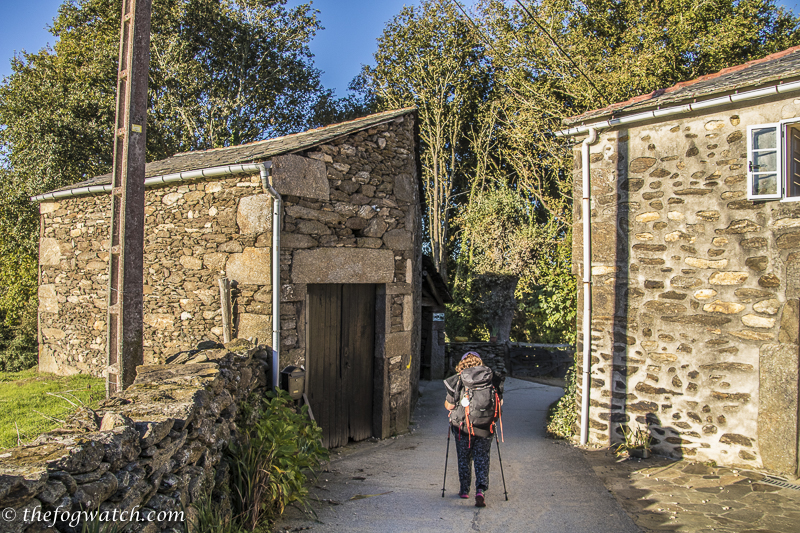 The track gave wonderful views and the weather was perfect.

The 100km mark came up fairly quickly – though there were a couple of markers where the distance plaque had been souvenired and sometimes even the ceramic Camino tile was smashed in an effort to souvenir it. We found one that was hand-written with 100kms, but there was still a little way to go. 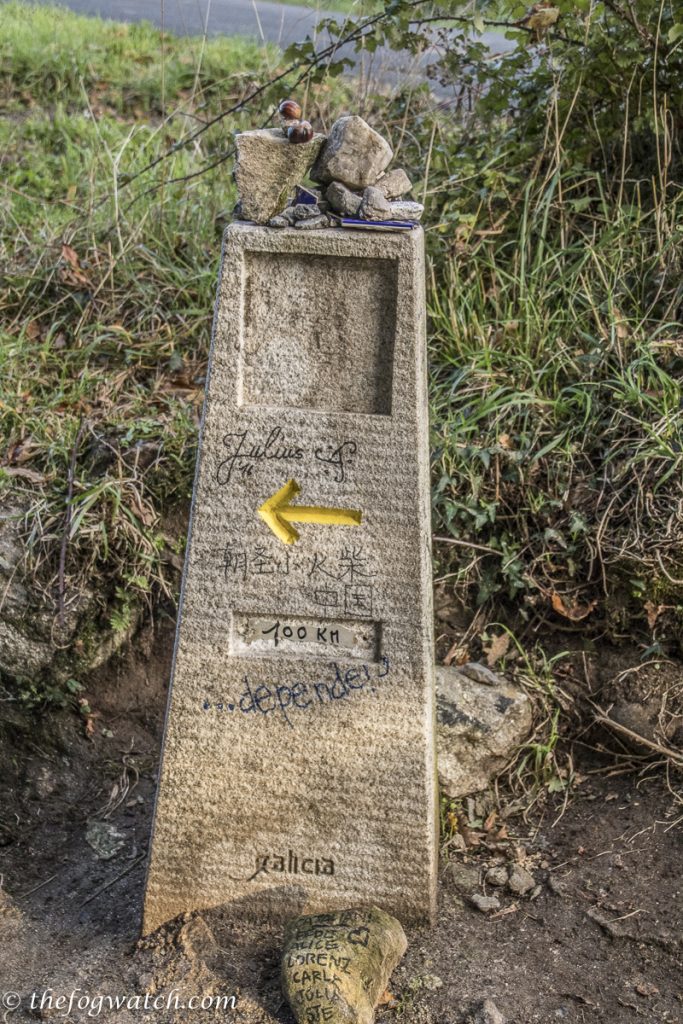 The ‘real’ one (pictured below) was actually engraved into the stone so it couldn’t be souvenired! 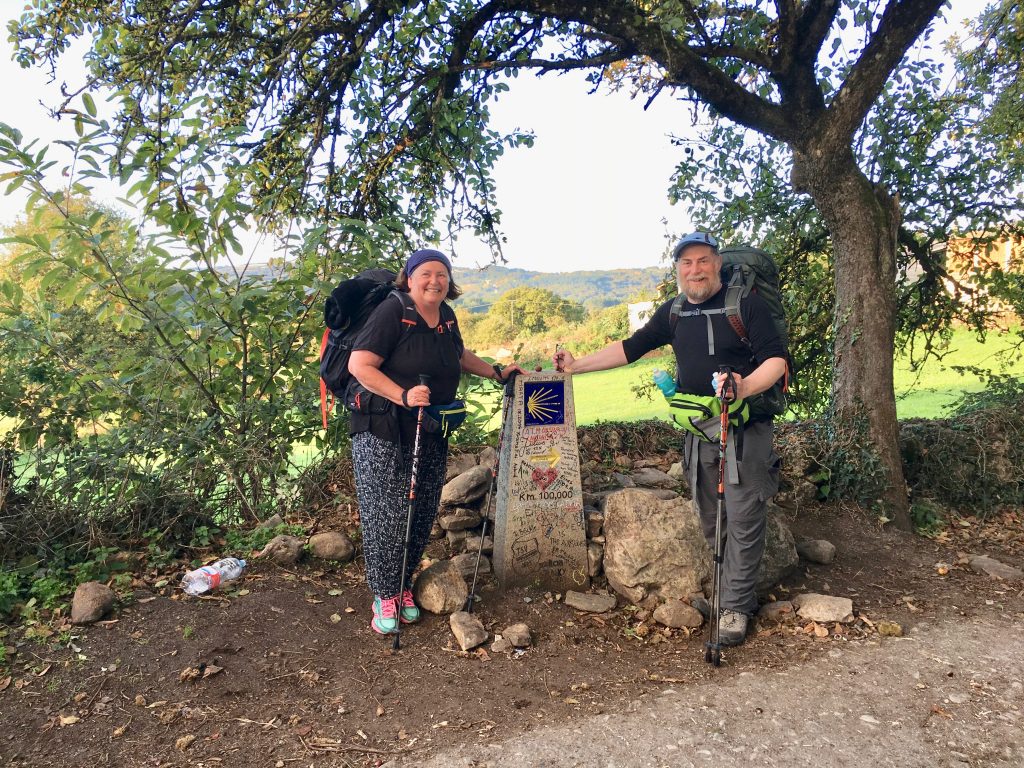 We had been warned of a particularly steep and difficult descent into Portomarin, but somehow failed to avoid it, and found ourselves committed to a muddy, rocky and leaf-strewn steep descent. Take care if you encounter it – about 1km out of Portomarin!

As we descended, we noticed what appeared to be possibly a Roman mine or water conduit cut into the hill. If you blinked you’d miss it. The hills surrounding Portomarin have been long known to have been riddled with Roman gold and silver mines, so it makes sense that what we found was either a mine or a fresh water spring. Fresh water was essential to any community, and there was certainly some evidence that the entrance to this channel was made by human hands. If we had taken the easier route we would have missed this completely. 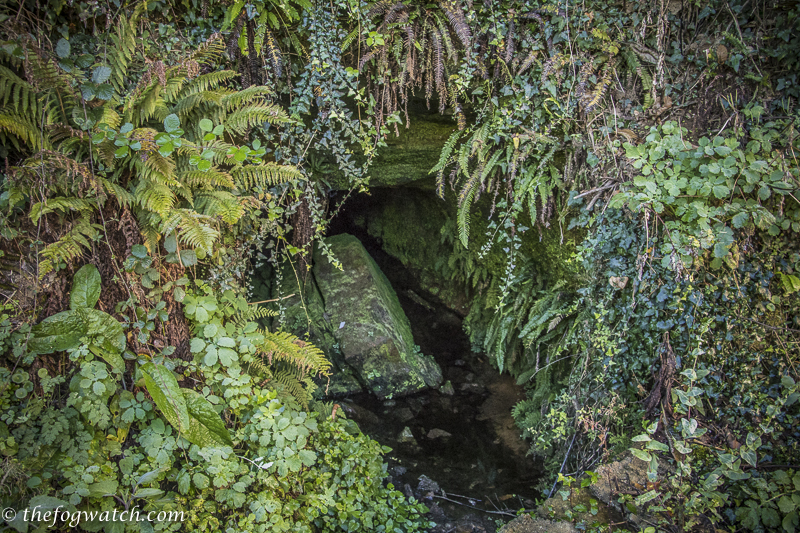 What first strikes you is the bridge over the river Mino and the view down into what appears to be complete town foundations uniformly reduced to below 1m in height, and the remains of an old stone bridge well below the level of the current one. At the other side, you enter the town either via a steep staircase or by a slightly longer, but less strenuous road that winds around to the right and up the hill. We did not feel like climbing the stairs. 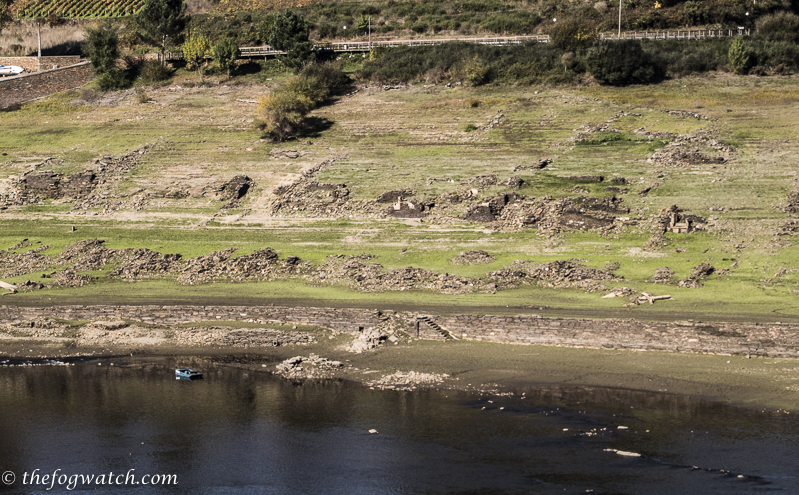 In 1956 the Embalse de Belesar dam was built downstream as a flood protection measure, so the whole town was relocated to higher ground to avoid the rising water level. Many of the original foundations – some dating back to Roman times – are still visible on the river banks when the water level is low. 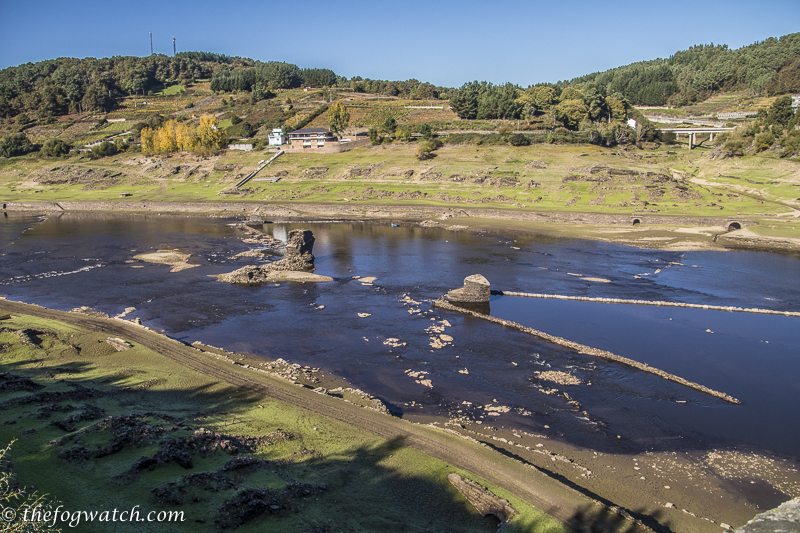 The Romanesque church of San Juan itself was relocated in its entirety – stone by stone, each individually numbered, so it could be reassembled at its current location in the centre of the town. You can still see the numbers on the stones of the wall. It must have been an amazing undertaking to carefully disassemble the church and reassemble it without causing too much damage to the precious architecture. 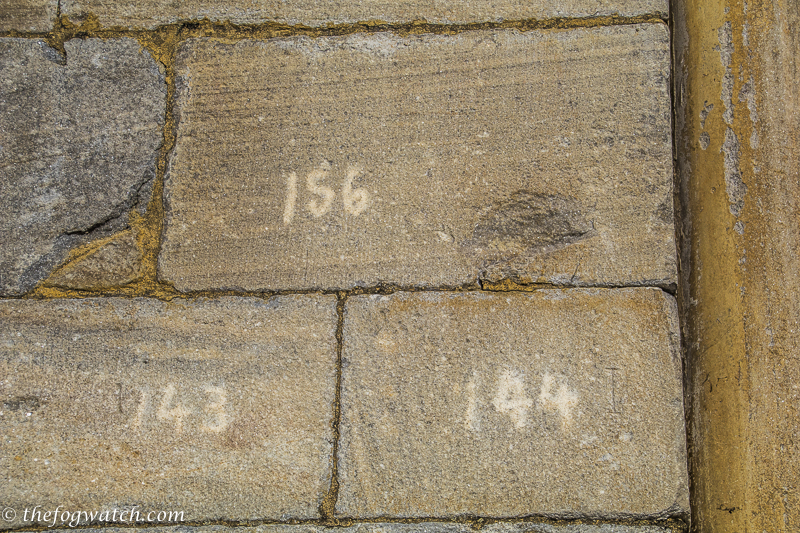 The church was built in the late Romanesque period, as a fine example of a fortified church. In the late C12th, the church housed knights from the Templar order until the order was disbanded. 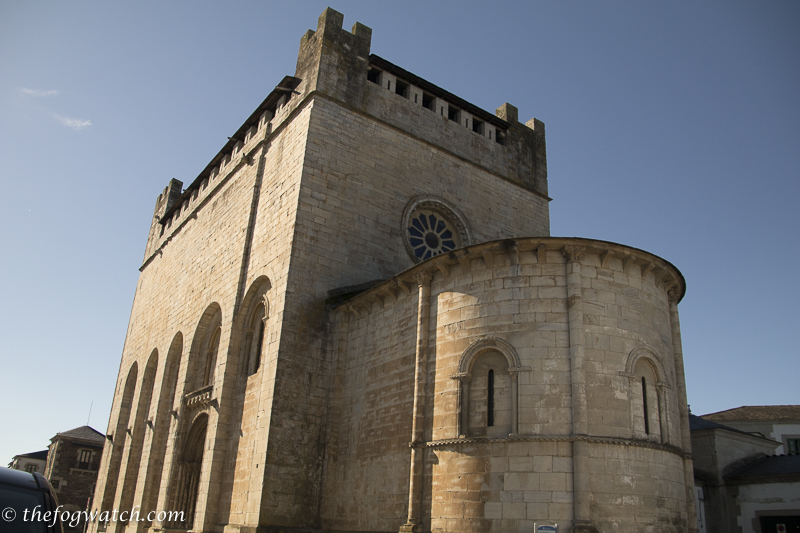 The adjacent C17th government administrative building – and former palace – was also relocated in its entirety.

We found a pension, and explored the main street, which housed quite a variety of bars and restaurants. There is also an amazing mural of St James on a wall near the church. 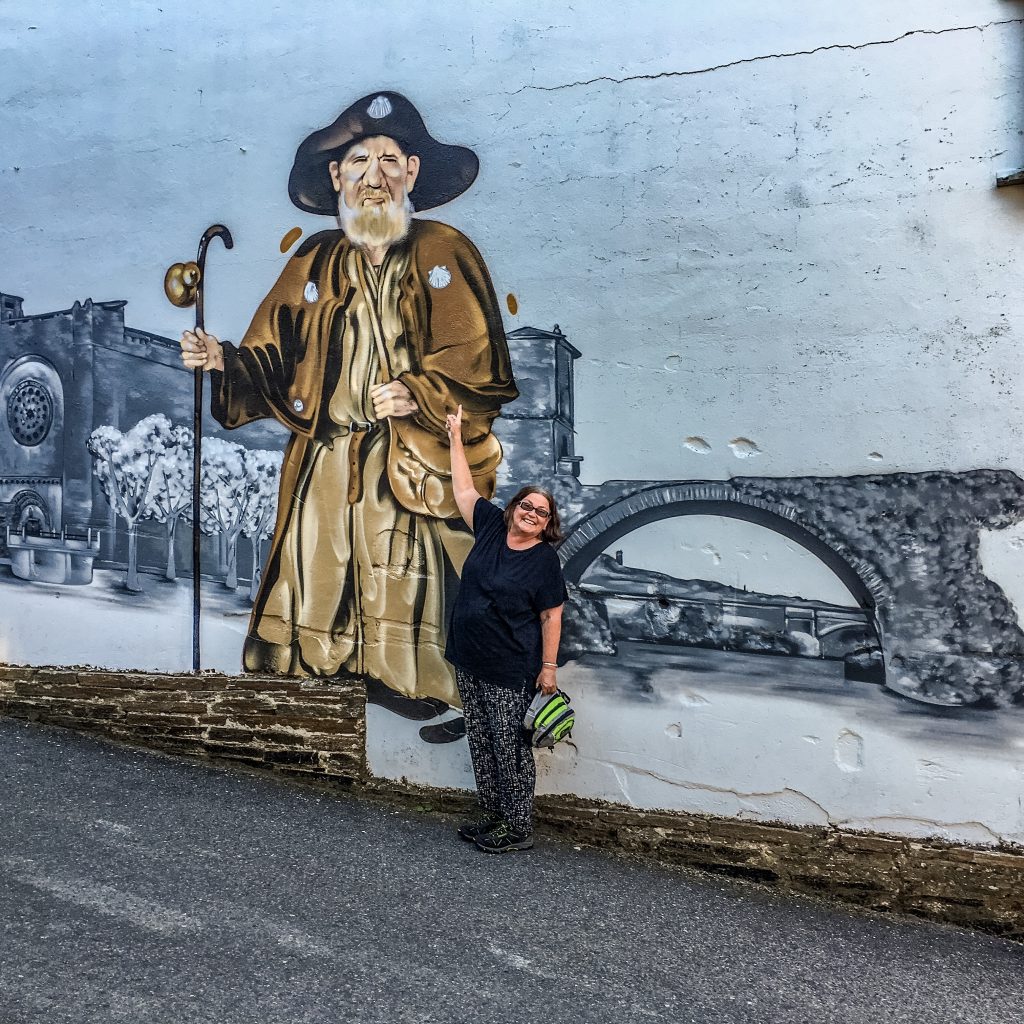 You could find everything from steak to pulpo – the Galician octopus delicacy, as well as pizzas and pastas. Further down there is a hikers shop where Sharon found a ‘bum-bag’ of the same brand as mine. 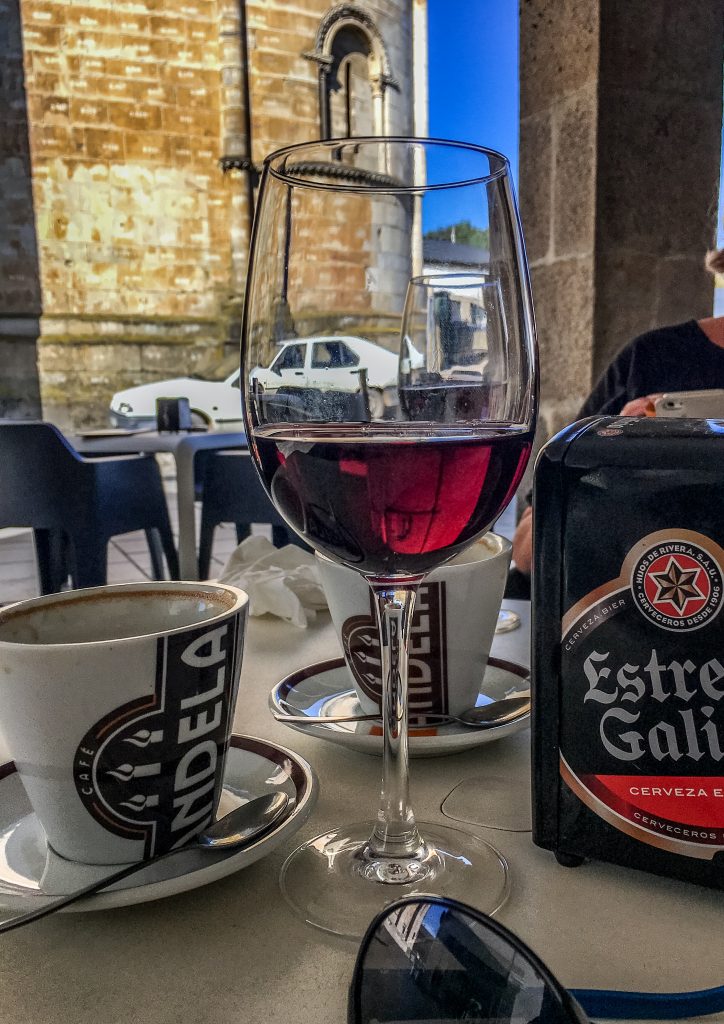