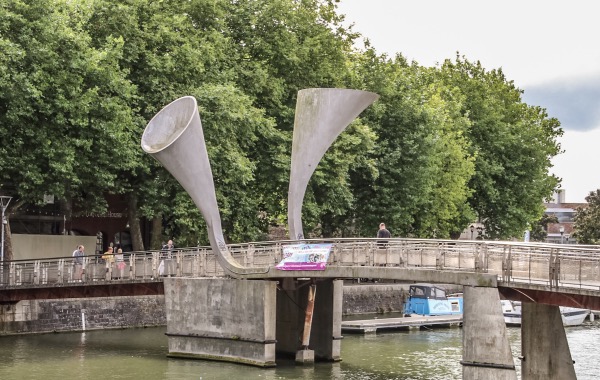 Pero’s bridge was named – controversially – for an African slave brought to the UK by West Indies plantation owner John Pinney. Pinney named him Pero Jones, and brought him back to the UK in 1783. Pero thereafter lived, worked and died in Bristol.

The slave trade was a morally dark period in Bristol’s history, which underpinned much of Bristol’s 18th century prosperity. And it is not an issue discussed openly. But there is at least acknowledgement, both in the naming of the bridge and in the museum display at the M-Shed that speaks frankly of the slave trade and the movement towards its abolition. Bristol was the second city outside of London to campaign actively for abolition of the slave trade, setting up a committee, public meetings, and petitions as early as 1788.

Women played an active role by instigating a boycott of sugar and sugar products. As women were the household managers, they held authority over what was bought for use in the house. And sugar was largely produced by slave labour on the plantations in the West Indies, so there was an economic impact.

The end of the slave trade in Britain

Aside from those who benefitted directly from the slave trade, there were a large number of pro-abolitionists in Bristol. The first petition raised over 800 signatures. And the Slave Trade Act was finally passed in 1807 by the British Parliament, banning the transatlantic slave trade.

So next time you cross a quirky footbridge seemingly adorned with two large trumpets, Spare a thought for Pero and and his compatriots, and for those who had the courage to take a stand for human rights, and for a place that has the maturity to acknowledge the darker side of its history.