Iconic on the outside, the church of St Martin-in-the-Fields is also a bit special inside. And not because of what you see. This post is about what you can hear when you venture inside.

First, a bit about the building. The earliest reference to a church on this site is in 1222 when a dispute was recorded over who should have authority over the church. At that time, the place was surrounded by fields used by the monks of Westminster.

Around 1542 Henry VIII built a new church here to keep plague victims from being carried past his palace at Westminster. The church was enlarged in 1607 by Prince Henry, the son of King James I of England/VI of Scotland.

That building was pulled down in 1721 to make way for a new church – the one we see today. This church was designed by James Gibbs and was completed in 1726.

Gibbs was influenced by Christopher Wren, but where Wren saw the steeple as separate from the building, Gibbs incorporated it into the fabric of the building as an integral part of the structure.

In Gibbs’ church, the nave, or central part of the rectangular building was capped with a flattened barrel-vaulted ceiling, divided into panels by ribs. Whether by accident or design, the resulting structure has extraordinarily good acoustics, making it one of the finest concert venues in the UK.

St Martins was really surrounded by fields until the 19th century when Trafalgar Square was built. So it would have been an amazing building to encounter on a muddy road between Westminster and the City of London – which still largely followed the form of the old Roman wall. 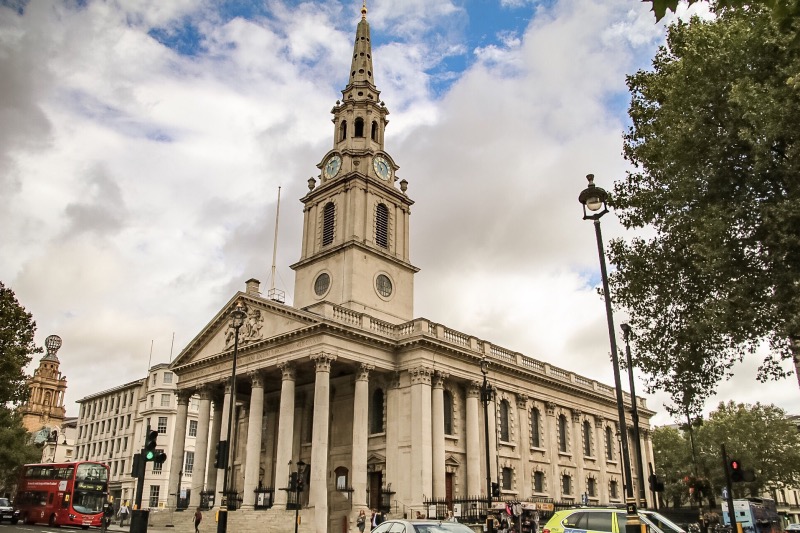 And so to music. The acoustics in St Martin’s is quite amazing. Just enough echo to provide warmth to the sound without the notes interfering with each other. There is great separation of the instruments and if you close your eyes it is actually difficult to pinpoint the source location of the sound. It seems to come from everywhere and within.

So to hear a concert of Baroque music by the Thames Chamber Orchestra is really something special (but don’t forget to hire a cushion(!)).

The 1748 Guadagnini violin played by First Violinist and soloist David Juritz came through in all its richness. In keeping with the period, the musicians limited their vibrato so the music was played much as it would have been in Handel’s or Bach’s time. The harpsichord played by Edward Batting was subtle, but ever present – never fully overpowered by the other instruments.

The building’s raised position and the location of the orchestra near the alter end meant there was no intrusion from the traffic noise, even in the quietest passages. That is quite something given how busy Trafalgar Square can be these days!

There are free lunchtime concerts most days (gold coin donation). But it really is quite special to hear a full concert played under candle light in an 18th century church with near perfect acoustics. So, if the visual stimulation provided by London seems a bit much, then why not treat your ears to some amazing live music that will live with you for years afterwards.