We slowed for Penong – home to 26 windmills, a roadhouse and a silo complex – and made our way to Nundroo. Nundroo, situated 152km from Ceduna, has a roadhouse and motel. The roadhouse is only open until 11.00 pm so if you are running short and it’s late at night, you might have to camp until 08.00 am when they re-open. I was almost caught that way on one of my crossings, so I have learned to refuel at every opportunity.

There are cattle grids on the road past Nundroo – between Nundroo and Yalata – which marks where the so-called ‘dog proof fence’ crosses the highway. It is one of the longest continuous fences in the world, and was designed to keep out dingoes from pastoral lands.

Yalata was once an Aboriginal mission station, and used to boast a roadhouse. When I first crossed the Nullarbor in 1976 I refuelled my motorbike there. I noted at the time that there were indigenous children staggering around sniffing petrol from soft drink cans and plastic bags. It was a truly sad sight. Today the roadhouse is long abandoned and there are no facilities for travellers.

Despite the signs we saw no camels, wombats or even kangaroos, but there is a special treat at the Head of Bight.

At Streaky Bay we were told that a large pod of whales was currently calving off the coast in the Great Australian Bight. And Head of Bight is the place to see them. The southern ocean is a highway for migrating Southern Right Whales. When calving, the whales come close to shore with their new-born calves where the currents are calm and the mothers can teach the new-borns how to handle the sea and when to surface to breathe – they are mammals after all. And their breathing holes are at the top of their head so when they surface they forcefully exhale to clear their ‘noses’ of any sediment and ensure they are not about to breathe in water and drown.

They are an amazing sight!

At times they launch themselves clear of the water in an exuberant display – perhaps a dominance display to improve their mating chances – or maybe they’re just having fun! This move is called ‘breaching’.

Sometimes whales want to check out what we humans are up to, so they perform a manoeuvre known as ‘spyhopping’ in which they will push their snout far enough out of water, enabling them to see around them at the surface – like a person treading water – perhaps they are checking the weather, or perhaps just curious at what is going on in the world of the air breathers. Some say it is so they can hear better near the shore and use the sound of the breaking waves to ensure they are still on the right migration route. But I reckon they’re just being tourists – inquisitive about the world around them.

We watched a seal zooming around between the whales – sometimes doing a slalom around the whale group – but always keeping a wide berth as it was completely dwarfed by even the young whale calves. And it certainly wasn’t going to take on an adult whale.

Coffee at the Head of Bight visitors centre saw us heading back to the highway to complete the 7km to Nullarbor Roadhouse. The old Nullarbor roadhouse (pictured below) has long been superseded by a modern new one.

The new roadhouse boasts a motel, cafe and caravan park and a toilet block with showers. A real oasis after a long drive!

The local air-strip runs just behind the roadhouse and although the plane is there mainly for emergencies, you can book scenic flights over the Nullarbor and go whale spotting from the air. Airport security is tight – you need to beware of spiders if you want to open that gate! Ignore the no entry sign at your peril…

Time to head on towards the Western Australian Border… 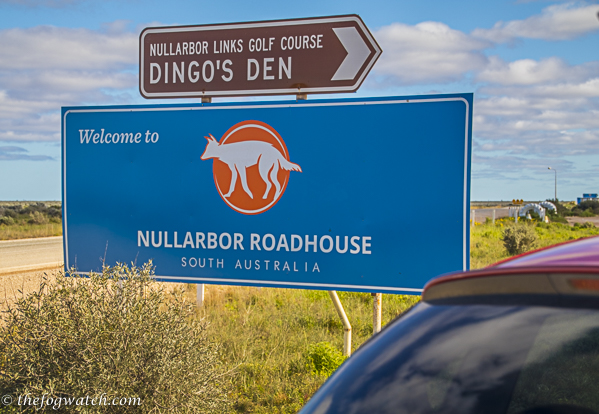