We set off early from Villar de Mazariffe, aiming to reach Santibanez de Valdeiglesias via the Puente de Orbigo. Again taking the alternative route – and from a quick count as we took the turnoff, it appeared that perhaps only about 5% take the alternative route, with most people continuing to walk along the roadside. Our path was quiet. 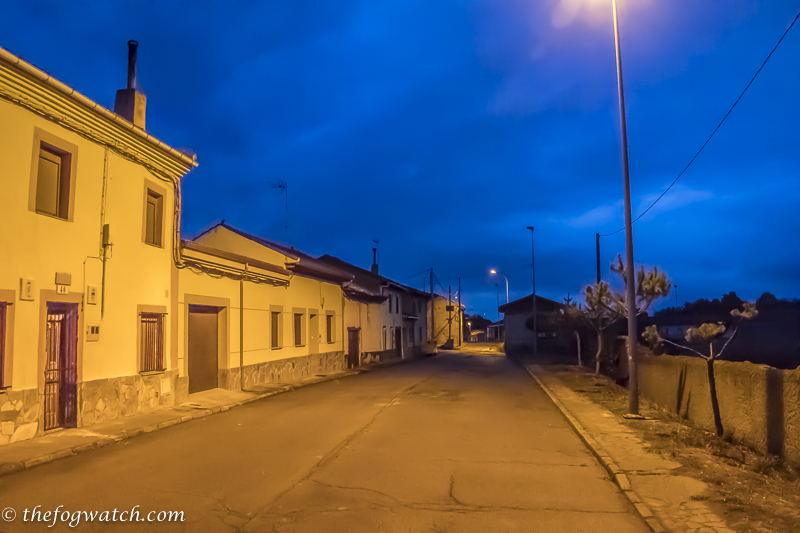 We walked with Julia – a young German woman from Nuremberg – for much of the day (she was heading for Astorga). But she seemed happy to stroll at our pace.

The track itself was arrow-straight, almost certainly on Roman foundations and accompanied by a modern irrigation aqueduct which fed the endless fields of corn. 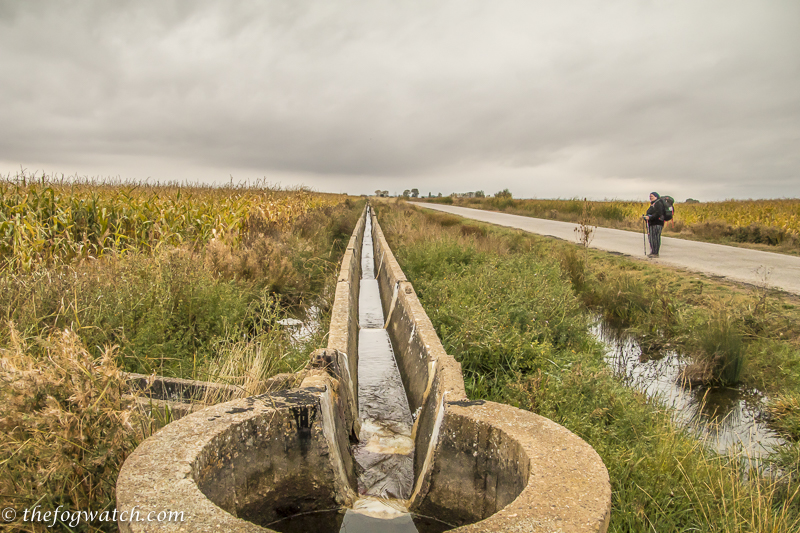 At Villarante we stopped for coffee – the tortilla was complementary (and most welcome) and we got our credential stamped there.

Looking around, we were walking through mostly rolling farmland. It wasn’t overly interesting, but at least it was away from the freeway! We passed an old farmhouse and stone hut. 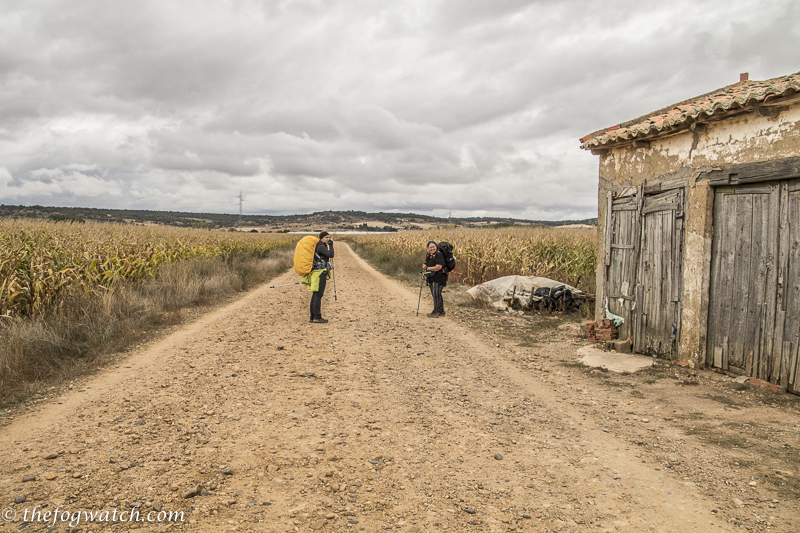 Coming into Puente de Órbigo we crossed an incredibly long medieval bridge extending right across the river floodway. The bridge dates from the C13th, and is one of the best preserved and longest medieval bridges in Spain. It was built over an even earlier Roman bridge, and I wondered how much of the earlier bridge was incorporated into this one. The bridge leads across the ‘passage of honour’ (Paso Honroso).

There is a legend of a famous jousting tournament that took place on this bridge in 1434. The story goes that a Leonese knight, Don Suero de Quiñones, was scorned by a beautiful woman. His honour questioned, he threw down the gauntlet to any who would pass this bridge, and knights came from all over Europe to take up the challenge. According to Brierly’s Guide, he defended the bridge against all comers for a month, until the required 300 lances had been broken. After this, with his honour assuaged, he undertook a pilgrimage to Santiago to give thanks for release from the bonds of love and for the restoration of his honour. 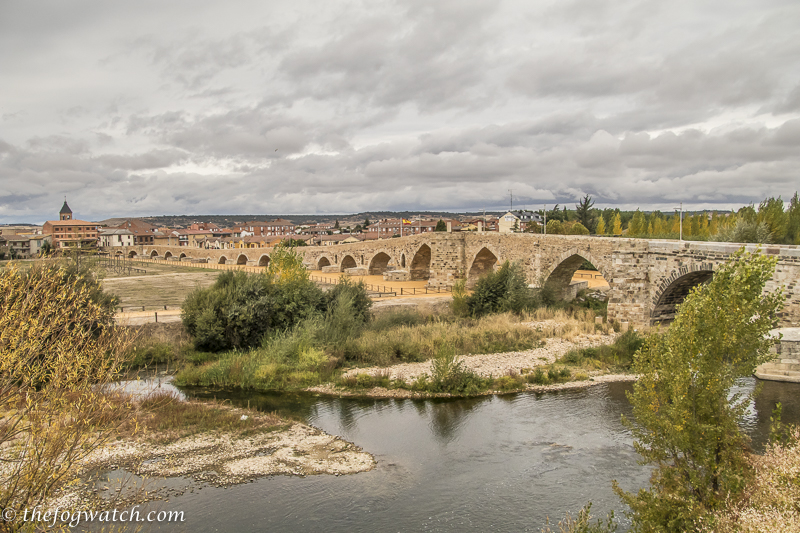 I thought about how often this tale and others like it have been reinserted into our popular culture over the centuries. It is likely that the knight’s tale was the inspiration for Cervantes’ tale of Don Quixote being challenged by the Knight of the Forest.

Then there was Little John defending the log bridge against all comers in the Robin Hood tale;

They happen’d to meet on a long narrow bridge
And neither of them would give way
Quoth bold Robin Hood, and sturdily stood,
I’ll show you right Nottingham play.

We mustn’t forget Tolkein’s story of Gandalf defending the bridge against the Balrog to allow the Hobbits to escape; and of course Monty Python’s Black Knight who taunts King Arthur even after all his limbs have been cut off by King Arthur (‘I’ll bite you to death, coward!’). 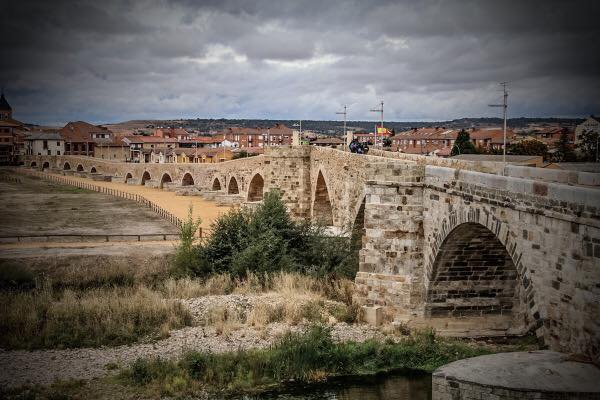 It could be considered that defence of one’s personal honour is a selfish and prideful act – or perhaps it represents the defence of a higher ideal. Nevertheless, life often presents us with challenges that require us to call on all our strength against adversity. Whether it is to stand against a bully at school or work, or even against the fury of nature itself. I recalled standing in my front yard – with Sharon in the backyard – during the 2003 Canberra Bushfire – we call it the Great Fire of Canberra – defending the house against the might of the firestorm. Each of us was armed with a simple garden hose, as we focussed on putting out spot fires while the embers rained around us like snow. With more heat coming from whichever way the wind blew, we knew that the fire was around us on multiple fronts. At length, after several hours, with a reversal of the wind, we finally knew the fire was in retreat and the house was saved. Perhaps the defence of one’s possessions is also in a way a selfish act, as we are of course only custodians of the resources used in the making of our stuff.

But the lesson we learned felt like a redemption of sorts, a cleansing, just as the Camino itself presents its challenges. And from that time forward, we knew that possessions were as nothing, as everything can be taken away in the space of an afternoon, as it was for many of our neighbours. From that point, we both decided to focus on experiences and education, rather than the acquisition of things. It was a lesson reinforced by the Camino, in which we are reminded that we need so little to travel so far. 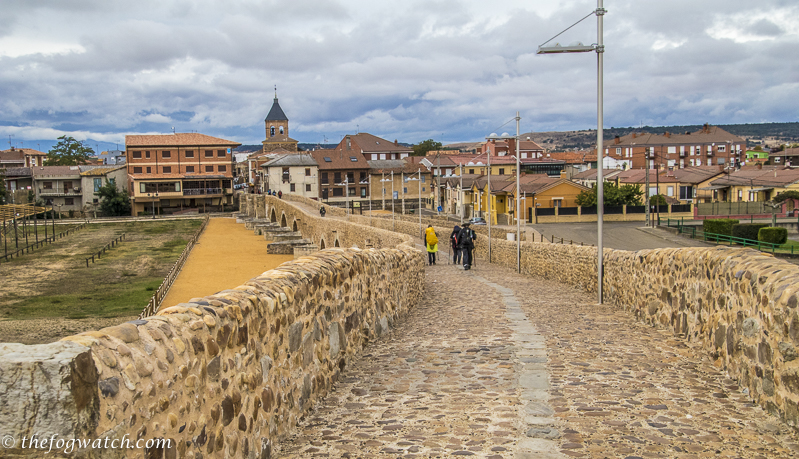 The bridge led us into Hospital de Orbigo where a small fiesta or celebration was taking place with pipers and dancers all dressed in traditional folk styles. It was very colourful! Perhaps it was a traditional wedding, but it seemed that the whole town had turned out for them. 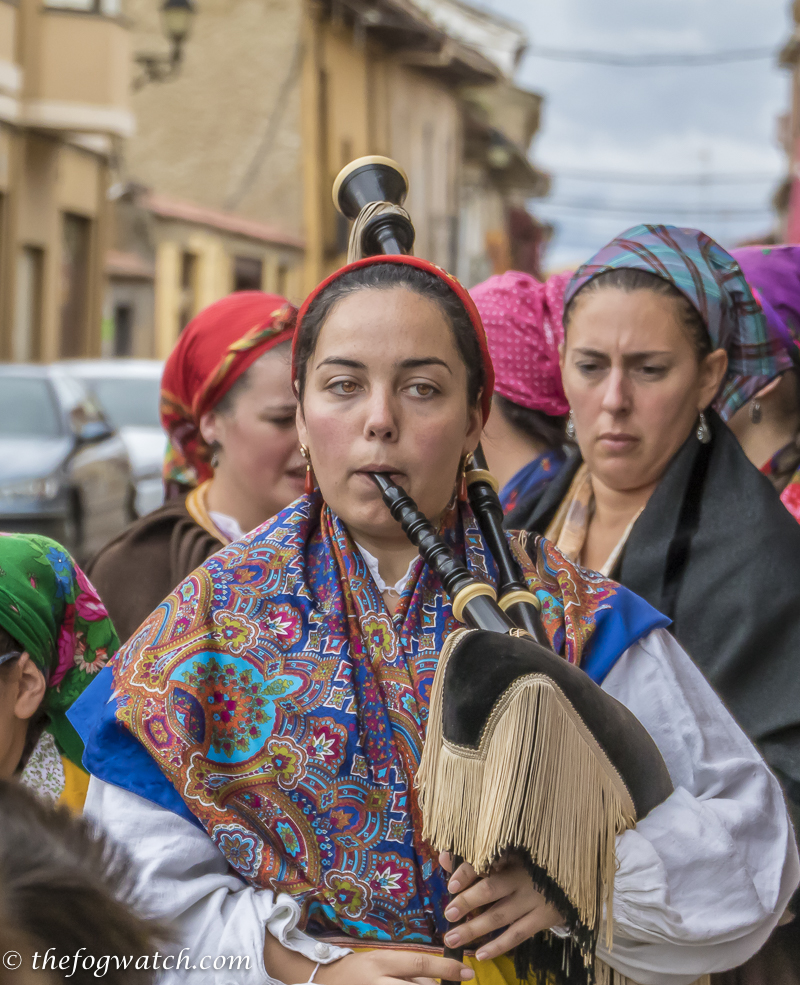 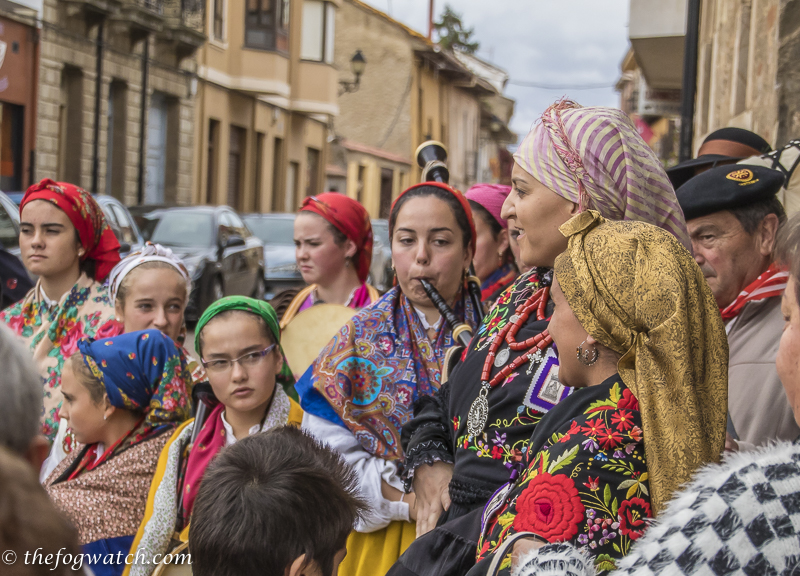 We continued on a further 2.2kms to Villares de Orbigo. Where we refilled our water bottles from the fountain. 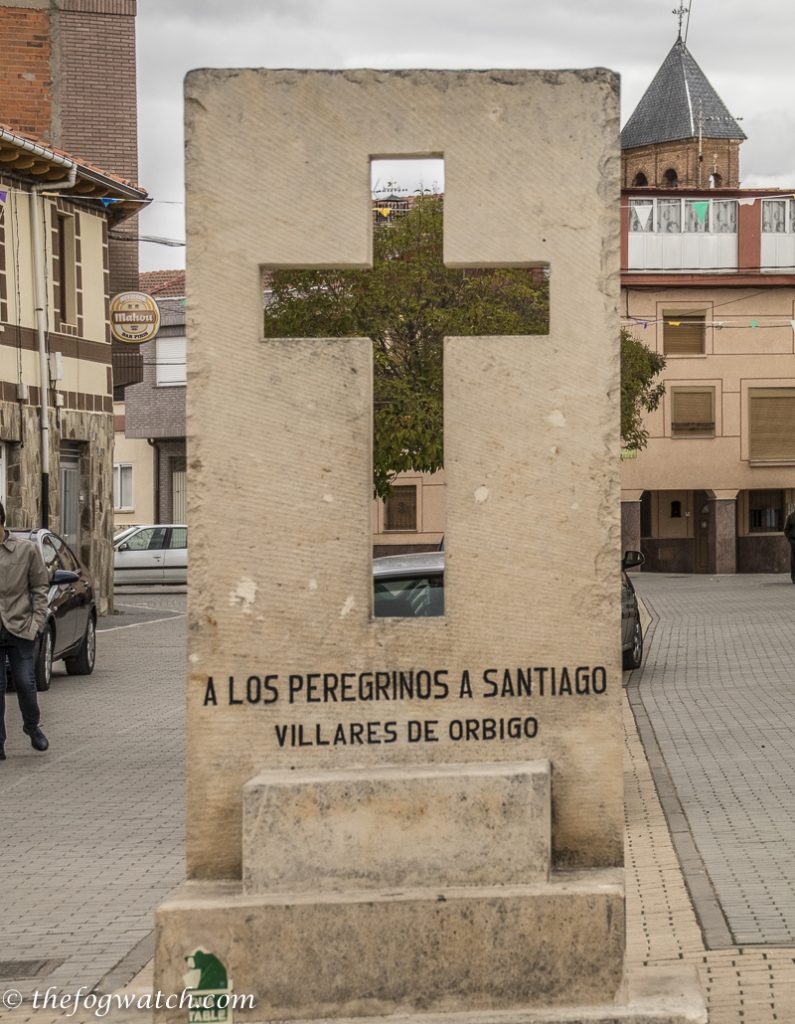 then a further 2.5kms to our destination Santibanez de Valdeiglesias. We stayed at the Albergue Camino Frances. 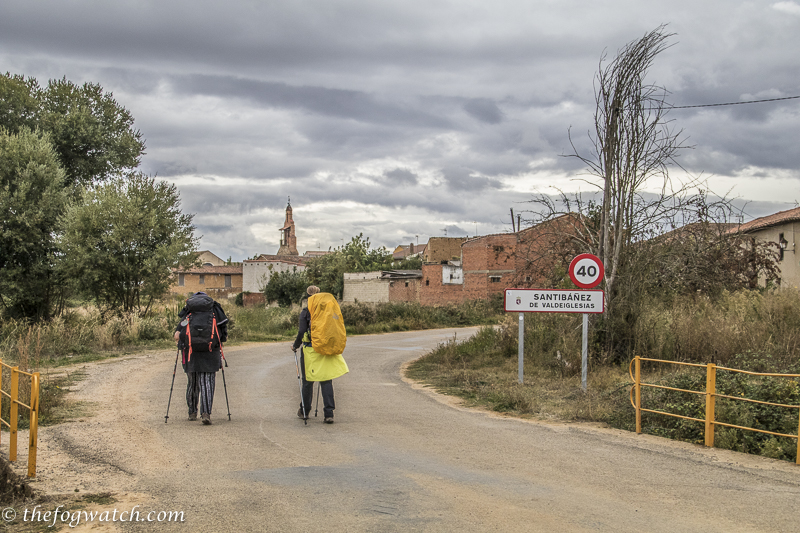 The cold showers were avoided, as was the washing… We had a good meal with Canadian friends John and Kristine, and American friends Joanne and Fumi. We got news of fellow Australian, Kane whom we had met – that he had caught the flu. It seems he had decided to depart from the Camino Frances route and onto the Camino Norte. But it was good to hear news of him – and we learned later that he completed his Camino successfully, as did our other friends from this time.

We were in a dorm room with bunks. We had limited sleep, and my phone charger stopped working. We booked ahead for tomorrow for a double room at Murias de Vechivaldo.