The rest day gave us a good opportunity to explore, and to take in the ambience of Logroño – the square providing an endless supply of coffee and street performers. 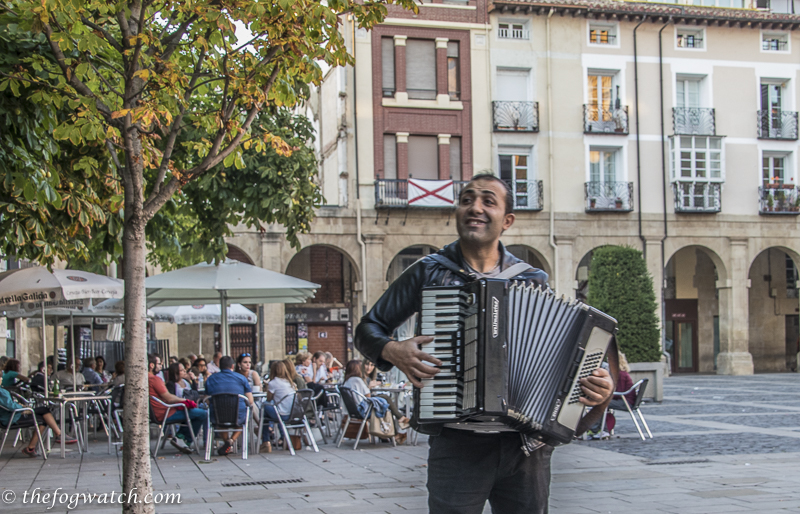 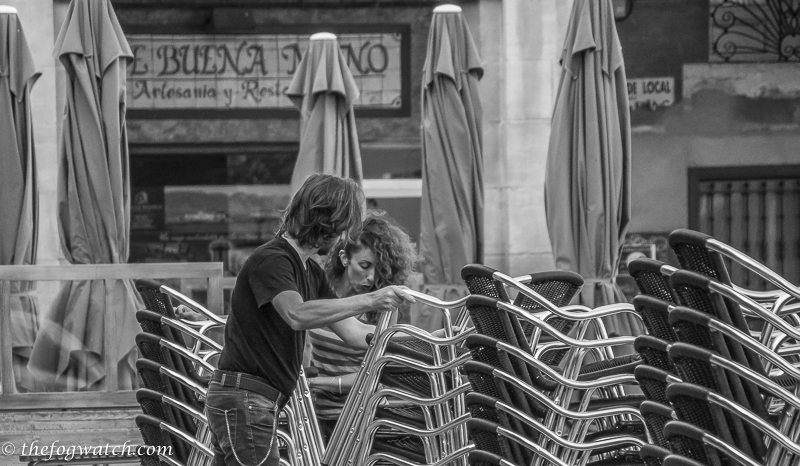 And the Cathedral dominated all from dawn to night. 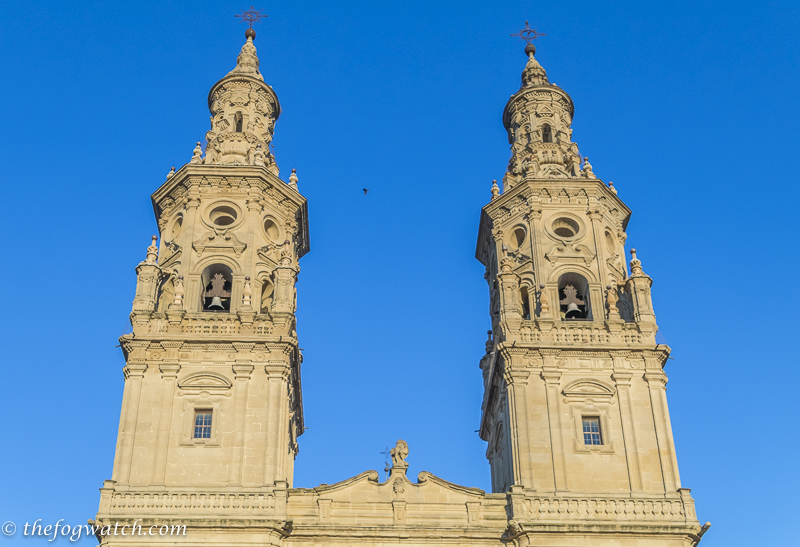 The following morning, we were up very early – 0430 and on the road by 0530, saying farewell to the cathedral as we crossed the square. Having rested up in Logroño, we decided to try 20kms with packs to Ventosa. Setting off confidently, within minutes the foot pain was back and we started having serious doubts about our ability to do the distance with packs. We considered turning back to the Albergue and send the packs from there, but decided we had already covered 500metres so we wouldn’t back-track. But we resolved to walk the next few days without packs, to give our feet and my Achilles tendon a chance to heal a bit. 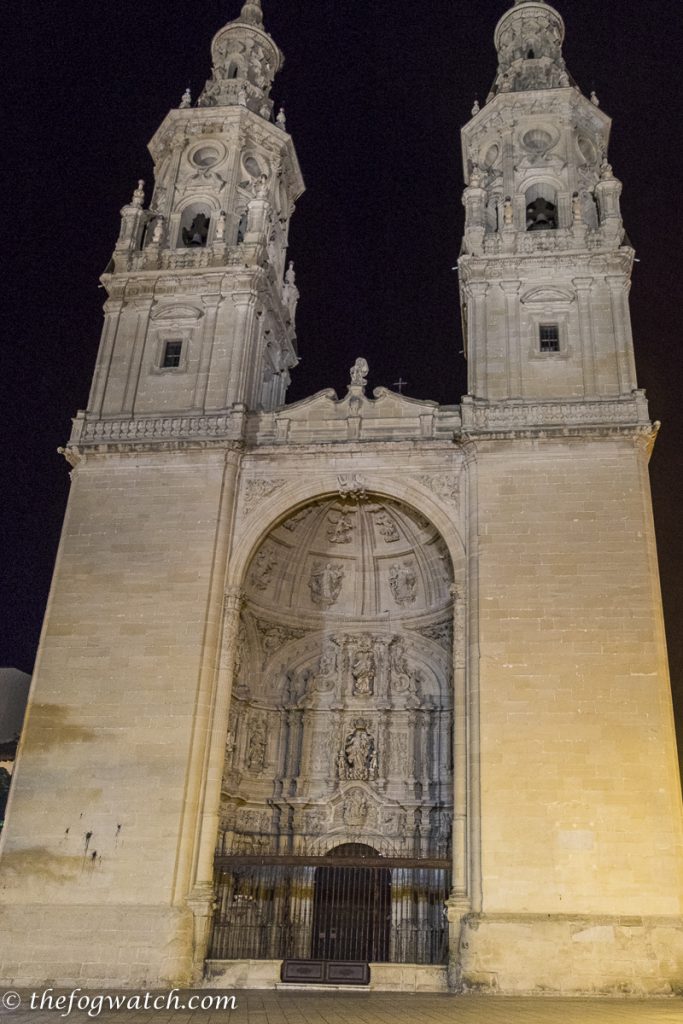 As we left Logroño, we walked through a park and took quite a while to adjust and settle our packs. We also worried about seeing the markers in the dark with our headlights. We stopped and had a bite to eat on a park bench and refilled our water bottles, then we were heading out through the Logroño suburbs. We needn’t have worried; the route was quite well marked.

Climbing, we entered a major park area with woods and a small lake with swans… and we saw squirrels! I stalked one to grab a couple of photos. It was quite diverting 🙂 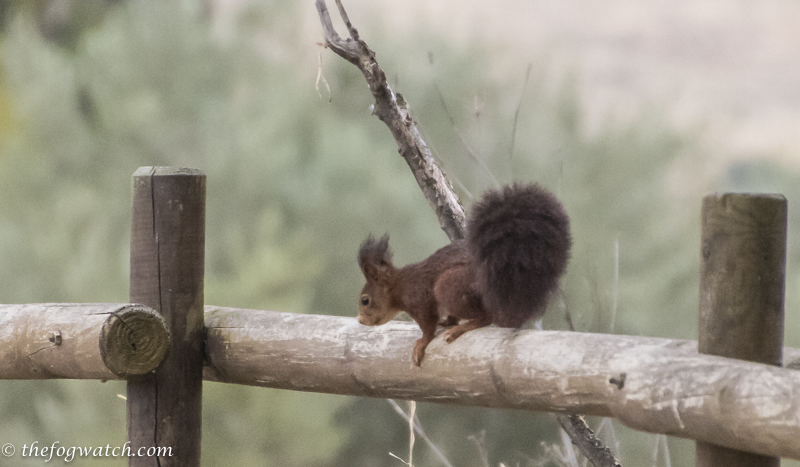 Luckily, I’m not easily distracted from… oh look another squirrel!

As we climbed we came across an enormous silhouette of a bull – we were told later that these billboards were all over the place, and were actually advertising a local alcoholic spirit. They were permitted only on the condition that no text accompanied them. Thus, while seemingly representing an icon of Spain, everyone was reminded subtly about the drink. Interesting loophole and one wonders if perhaps it existed because of some exchanges of funds with the local government… 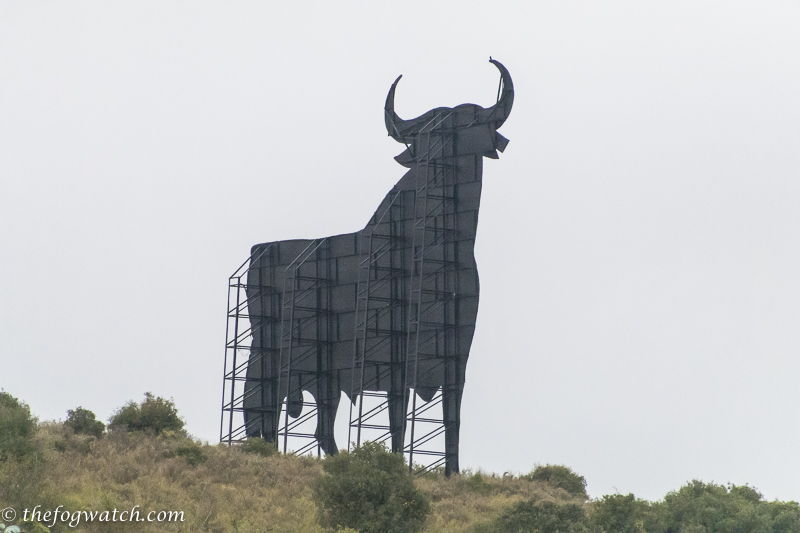 Following the road towards Navarrete, we noticed some ruins just before the town. It turned out they were the ruins of a medieval pilgrim hospital. We stopped and had a good look around. 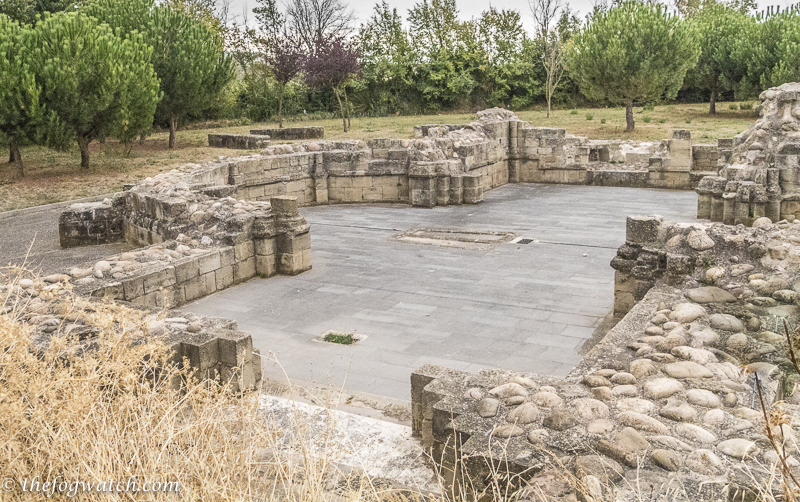 The hospital was founded in 1185 and flourished during the middle ages, however reports from 1568 mention that only lower floor was usable due to the collapsing roof.  The Carlist War finished off the destruction and in 1886 the portal was moved to the the west end of Navarrete to serve as the entrance to the cemetery.

As we entered the outskirts of the town we passed a vineyard with a sign saying: ‘Santiago 576kms’. This lifted our spirits and gave us the strength to continue on to Ventosa. But don’t believe everything you read in vineyards – the distance was out by 50kms!

On to Navarrete where we had a coffee and a fairly ordinary but edible boccadillo before moving on. We had made Navarrete by 10.00am so our pace was good, even if accomplished by pushing through pain. Yes it would be easy to gloss over this aspect, but we need to be realistic – the Camino is not easy, and requires mental as well as physical stamina. We noticed that a lot of people were taking pain medications, and the local Farmacias were selling ibuprofen/Nurofen at three times the dose of the ones back home. I could understand why, but I wonder about the effect on the kidneys and stomach lining.

Leaving Navarrete there was a cemetery with the Romanesque entrance facade taken from the Hospital at San Juan de Acre. 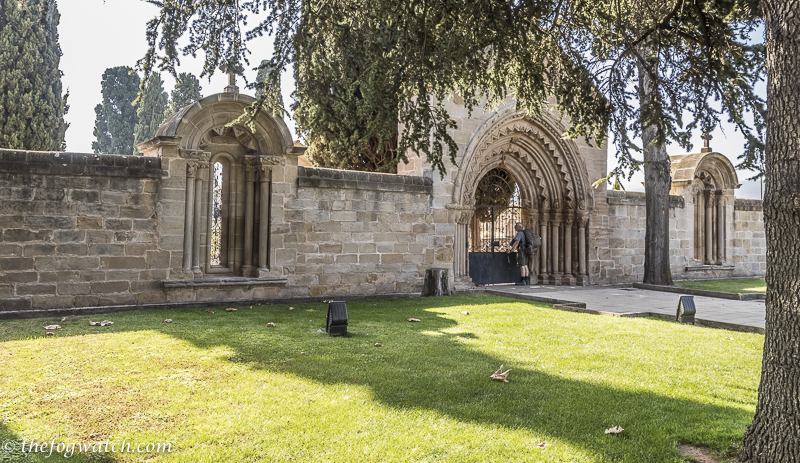 “The cemetery facade was transported from its original location the old son do on the acre hospital (founded in 1185 by Maria Ramirez, widow of fortun Baztan and the mother of Martin Baztan, the Bishop of Osmo) which was built to provide shelter for travellers on the Jacobean route. It was moved in 1887 following plans developed by the Riojan architect Luis Barron.

It has a Proto Gothic style but Romanesque Capitals finish the side columns, displaying plant motives as well as pilgrims and epic narrative topics.”

This was followed by more vineyards and open terrain, always rising. 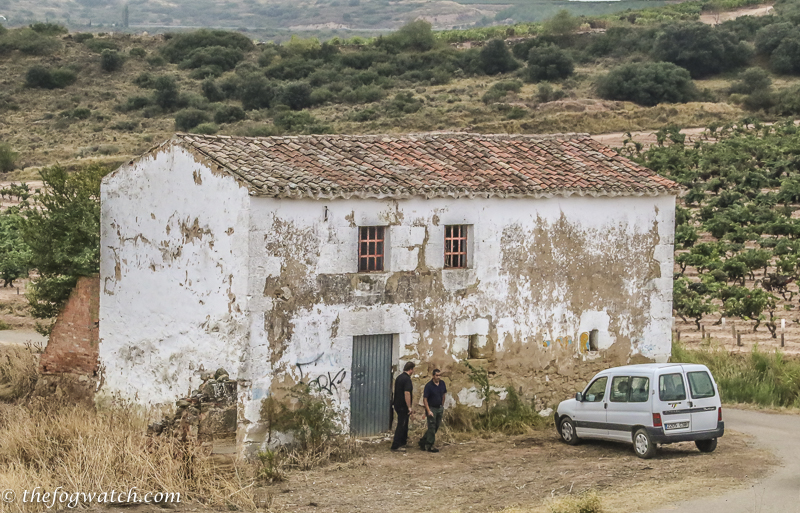 My Camino quote for the day “At any junction, why do the Camino arrows always point uphill?”

The grapes hung heavy on the vine – ready for harvest. Some pilgrims passed us, offering grapes they had taken from a nearby vineyard. We declined – the grapes are the livelihood of the locals, and they don’t need pilgrims going through their vineyard like locusts. It is hard enough for them to earn a living. But the grape-laden vines were worth a photograph. 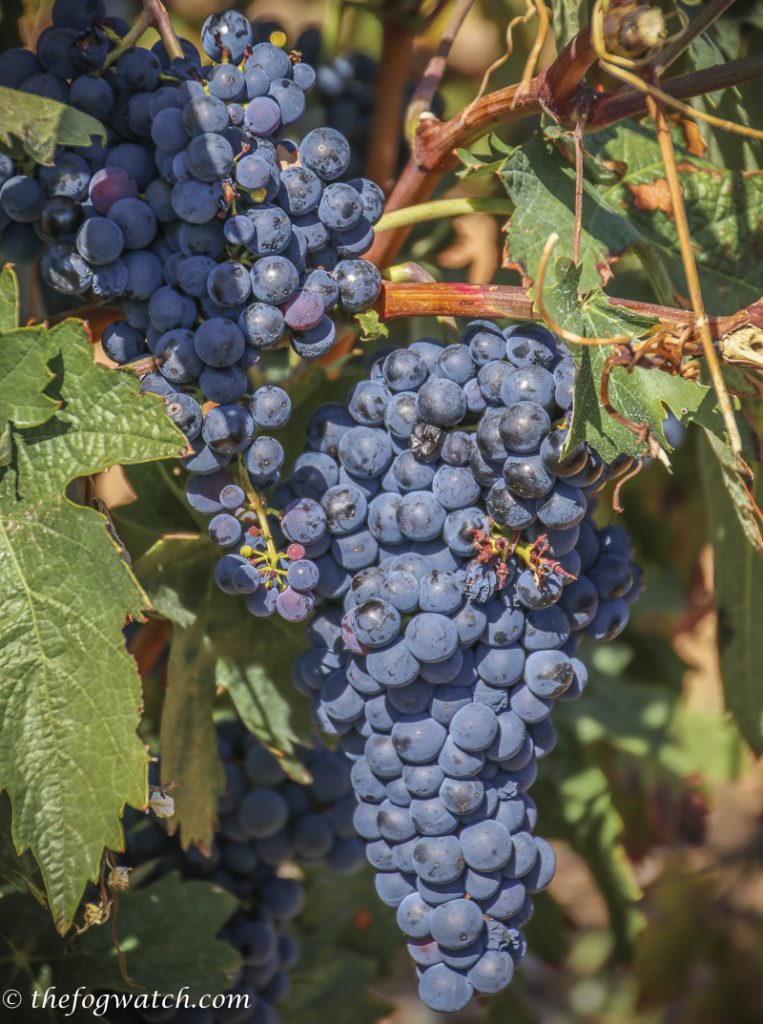 We passed a donativo food stall run by the hermitage of the pilgrim intern Marcelino Lobato Castrillo – Marcelino certainly looked the part! 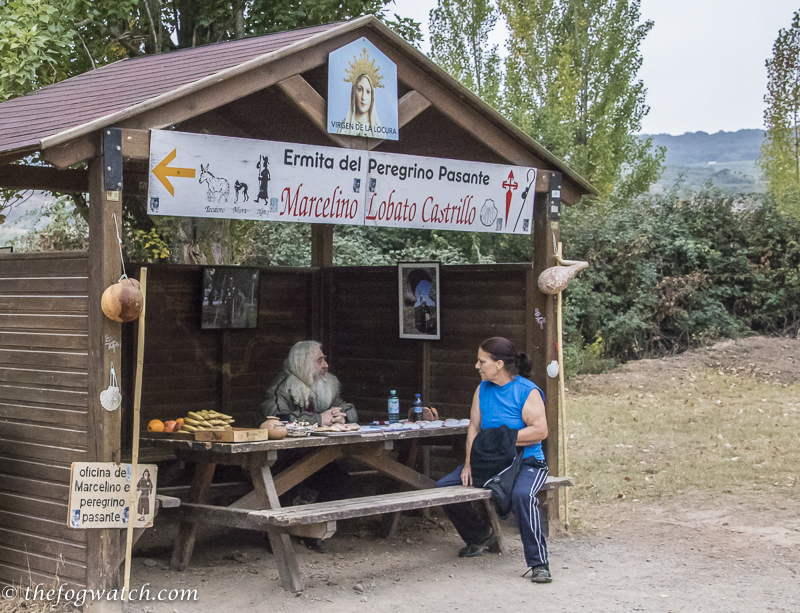 We reached Ventosa exhausted and low on water as we staggered into Albergue San Saturnino. We were greeted warmly with cups of cool filtered water and an invitation to sit down, and take our time before signing in.

We had a room with 10 bunk bed sets but we both managed to get lower bunks. We did our washing and chatted with Dana from New York State, then with a couple from Honduras and Italy – we had dinner together at a local bar – good food, good wine.

We returned to pack our bags and charge our devices. We have an English man staying who has the voice, manner and bearing of a younger Peter O’Toole – I wondered if perhaps he was related.

The Albergue is clean, neat and has great ambience. I bought a St James rosary. And so to bed. It seems we are to be woken with music at 0600am and out by 0800. We are set for a lovely stay here.