We came down from the Cruz de Ferro. Manjarin – associated since the C12th with the Knights Templar – came slowly into view. We had Ponferrada in mind. 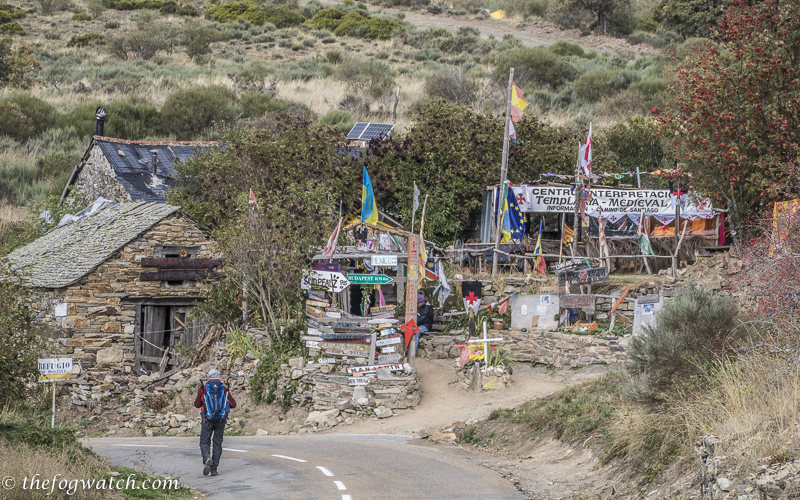 I must confess that at first I thought it was a vagrant’s camp with random tattered flags and half-ruined rubble piles with tarps dragged over them and junk lying all around. And the dog. 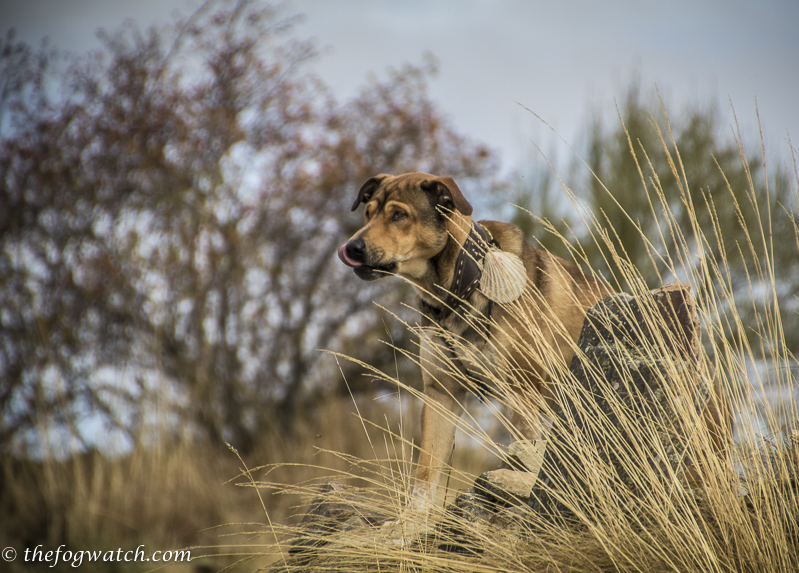 Then it dawned on me, that this was the donativo albergue with no electricity (for that authentic rural experience) run by the self-styled last Templar, Tomas. No doubt he believes that and his heart is as good as any, but even with sore feet we were not tempted to stop. Tomas brings the permanent resident population to one. Amid the tattered flags and scattered tarps there was a multitude of wooden signs pointing to several places around the world, but the key one said: ‘Santiago 222kms’. 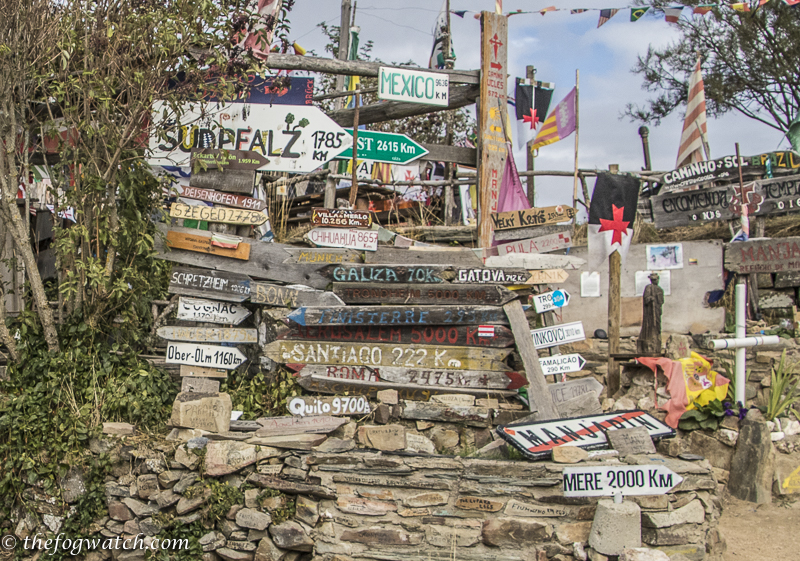 We were in the mountains, and supposedly it is now downhill to Ponferrada. But our destination was closer – as our feet were getting sore while the view was getting better. Whoever said that Spain was flat?!!. And we were heading for Galicia. 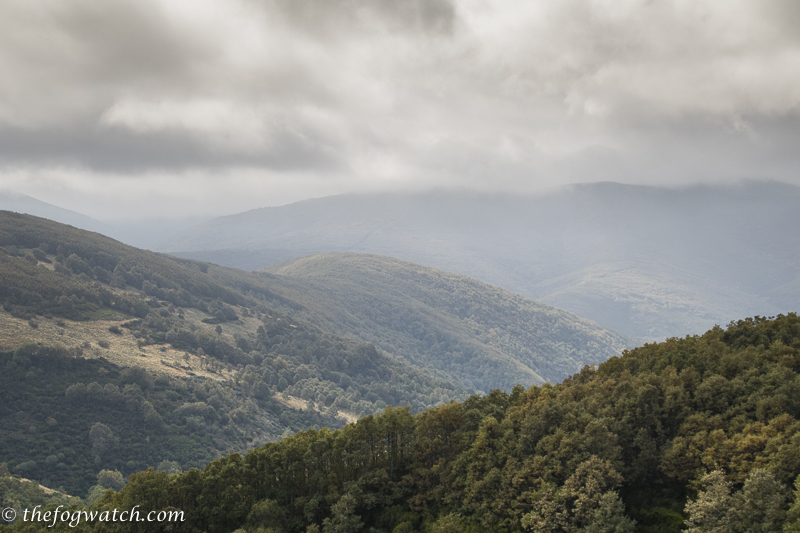 The rough path took us along the edge of a cliff 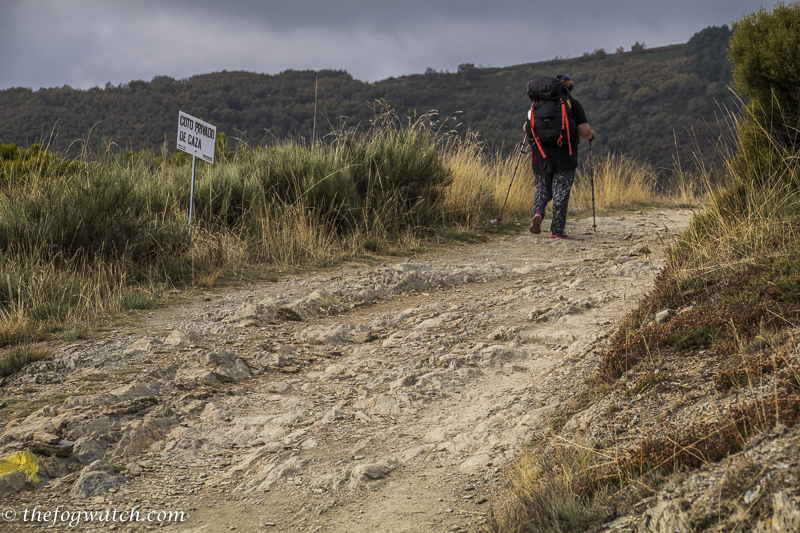 before descending towards a maple tree that shone like a beacon to guide us to a shady and somewhat cooler spot. The place was Santa Colomba de Samoza. 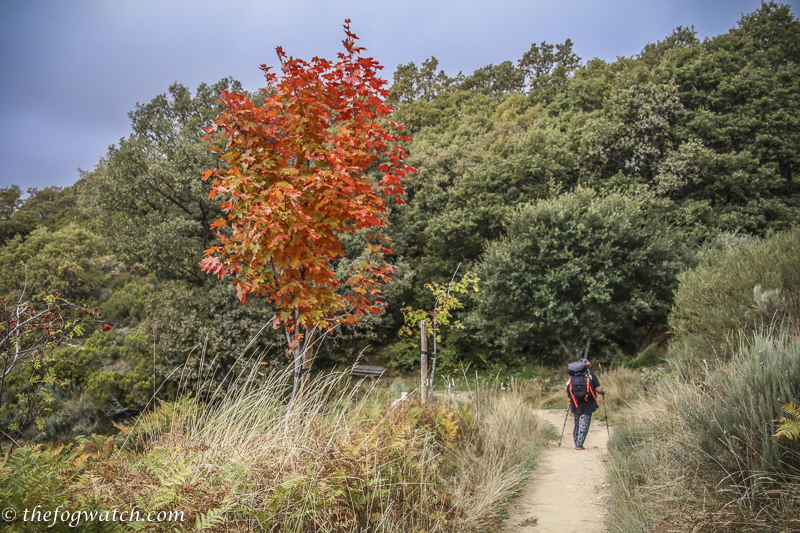 We watched mesmerised as we saw something spinning in the breeze – it was a rosary hanging from a thin branch on a tree in the clearing.

The views continued to be spectacular, although daunting to contemplate crossing on foot. 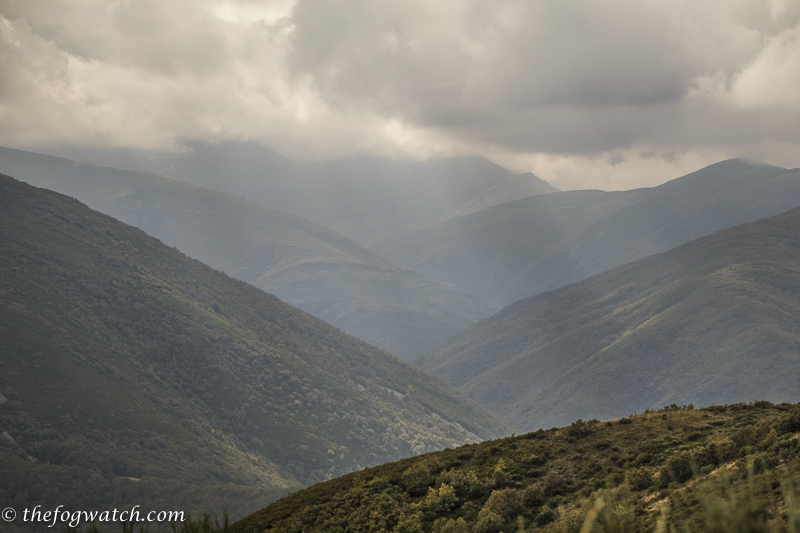 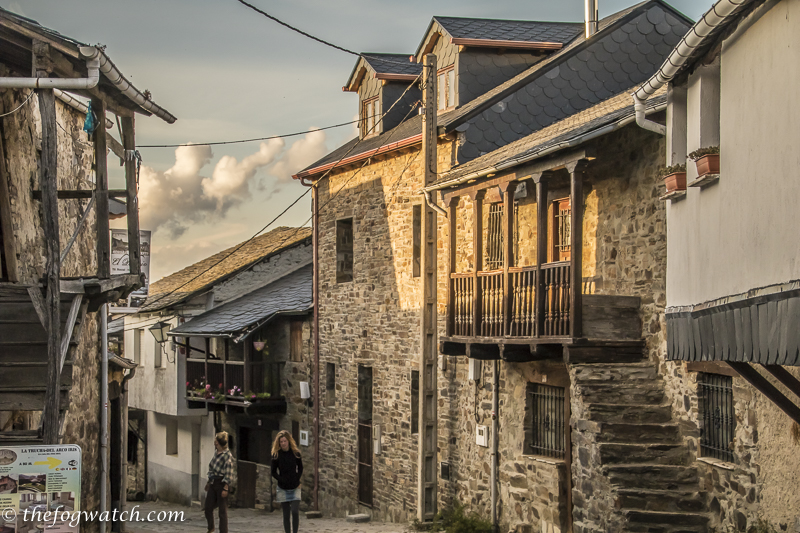 Then on to El Acebo, an attractive mountain village in the region of El Bierzo.

St. Fructuosus wrote of the founding of its first monastery in the 7th century and the place has given rise to the Saints Justo and Pasor. One can also see the site of the Medieval blacksmith of Compludo from the view of the monastery. A legend states that a sword was forged here, that Pelagius of Asturias had used in the Battle of Covadonga.

The village has certainly seen a revival due to the resurgence of modern pilgrimage. But, unlike Paolo Coelho, we were not looking for a sword. Instead, we were entering the Bierzo region – Spain’s other great wine growing district. And the tinto was exceptional.

We stayed in a friendly Pension to save our feet for Ponferrada, and dined across the street before retiring for the night.

It was long.
It was winding.
It was steadily downhill
And many people felt broken at the bottom.

Molinaseca is a town of around 800 inhabitants and it has been around since Roman times. Indeed so has the bridge across the Meruelo river. We continued on after coffee at a cafe by the bridge, and headed on to Ponferrada.

Ponferrada is a decent sized city dominated by a genuine Templar castle which was truly amazing. The Castillo de los Templaros stands out as a major landmark in the city of nearly 70,000 people. Why here? It seems that the Templars were given the town in 1178 by Ferdinand II of Leon, in order to protect the pilgrims on the Way of St James as they passed through the La Bierza region en route to Santiago de Compostela.  The castle was built around 1290, and housed the Grand Master of the Templars of Castille. As the order was dissolved in 1311 – on the notorious Friday 13th of October – the castle was never taken by force, so it remains today, much as it was when the Templars inhabited it.

We met Australian Camino friends Bernadette and her friend Alan, and after some lunch, we visited inside the castle. 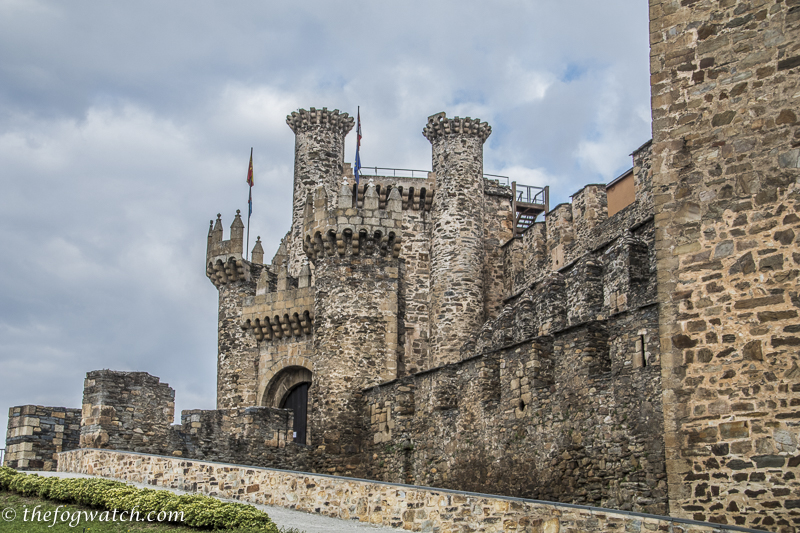 The castle is largely intact and in the afternoon when it opened we toured inside. It was easy to see the layered defence system and how it all related together to form a coherent whole. 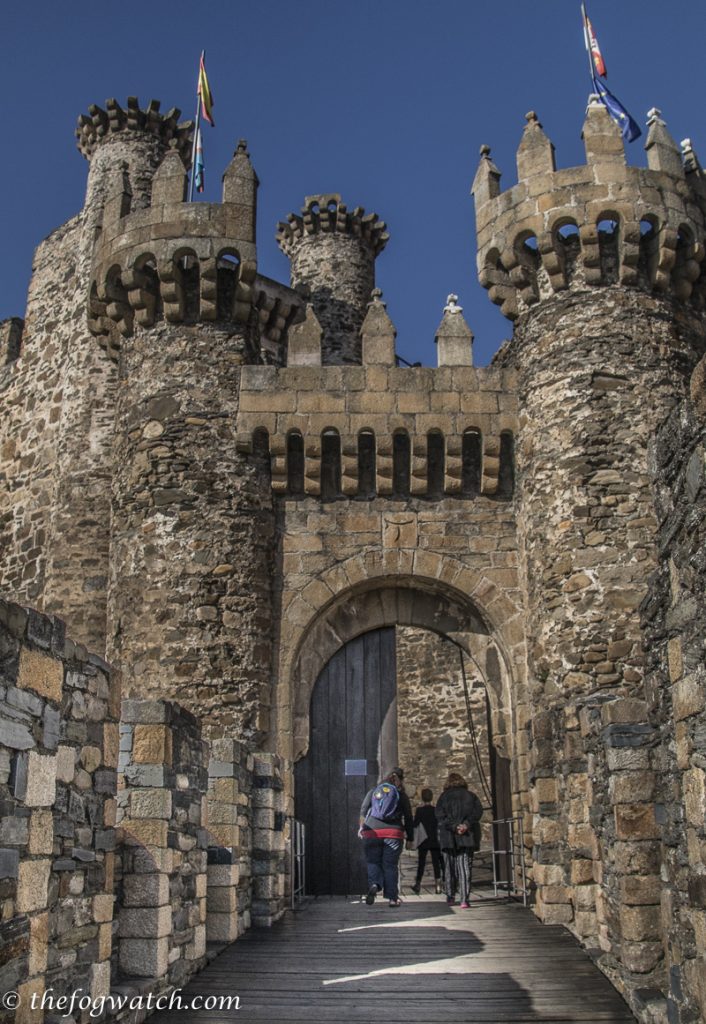 Although only in use by the Templars for 20 years before they were disbanded, you could see how this place functioned as a sanctuary and as a deterrent to those who would seek to attack, and as a visible symbol of power as if to say ‘you don’t mess with the Templars’.

The castle also held a small library with some of what remains of the Templar archive. The illuminated manuscripts were well worth seeing. As they were behind glass, the circular polariser took care of the reflections for the camera. Without it, the reflections would have washed out large sections of the image. 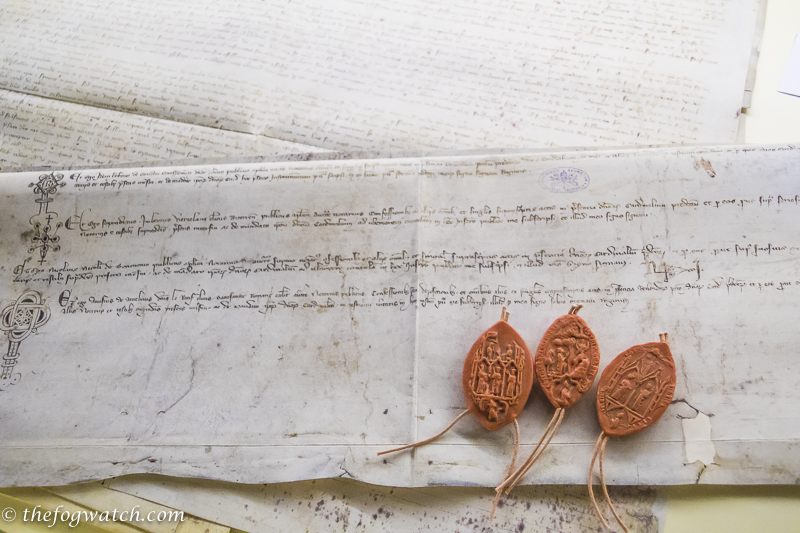 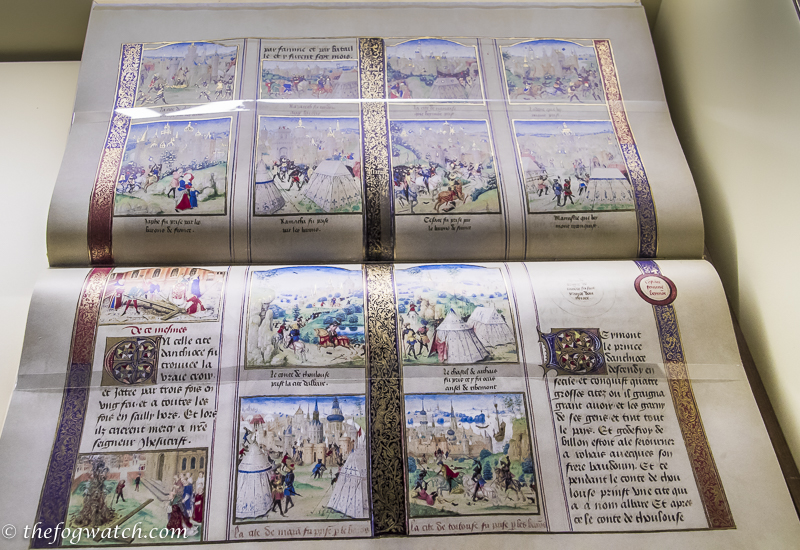 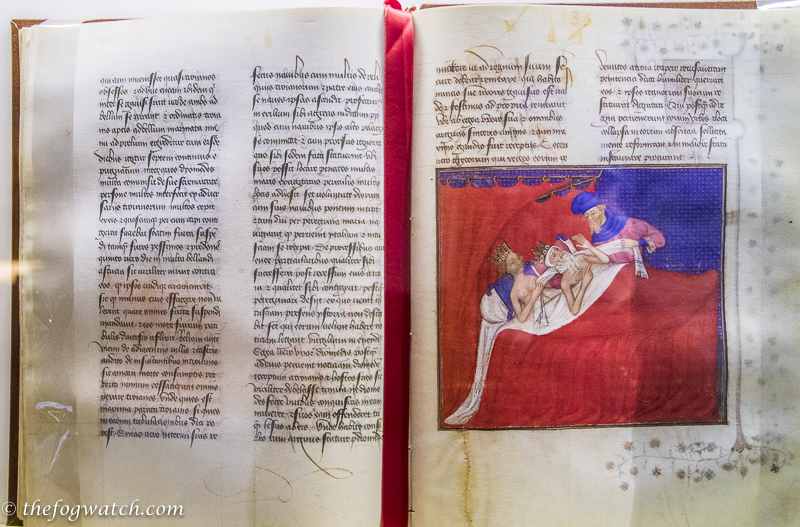 The Basilica de la Encina is also worth a visit. The church was built in the Renaissance style in 1573. Its baroque tower dates from 1614. The altar piece is quite striking. 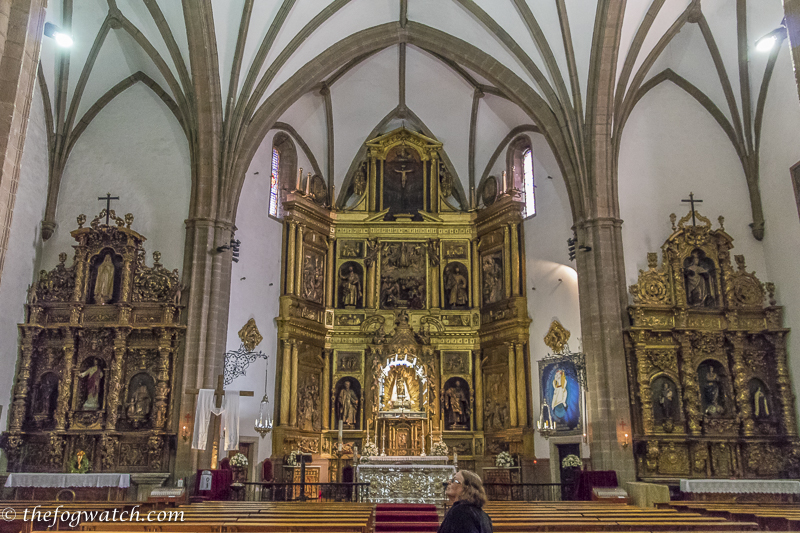 Ponferrada also has a radio museum – with an outstanding collection of old and historical radio receivers and associated equipment. Outside of the museum, we found an ancient wisteria vine supported on tasteful steel tendrils that blended into the plant itself. 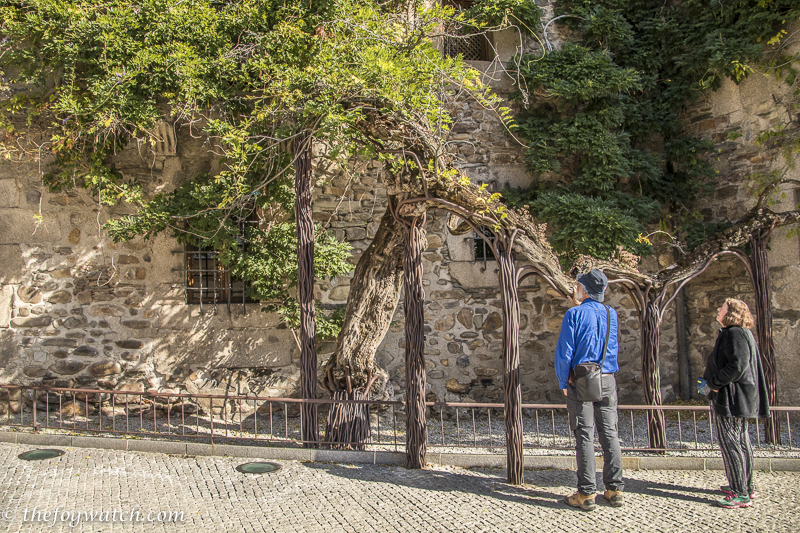 This is definitely a place to come back to, there is a lot here we didn’t get to see, but will certainly return to explore further on our next Camino 🙂 And of course it remains a major stage on the Camino Frances.

We returned to our Pension for a good night’s rest.

Why not have these posts delivered to your in-box? Just enter your email address and click the ‘subscribe button to your left, then respond to the confirmation email in your in-box 🙂