As the Cassini Saturn probe prepares for its final few orbits before being de-orbited into the planet, it’s worth considering who it was named for – the C16th Italian astronomer Giovanni Cassini. These days the Vatican collaborates with the European Space Agency and NASA on space science. Even the Vatican Library uses an image file storage system developed by NASA – it was a system originally designed for radio astronomy.

But it is worth remembering that the Church has often had an uneasy relationship with science. Galileo Galilei was tried in 1633 for heresy by the Inquisition and was sentenced to formal imprisonment – one of the Church’s ‘oops’ moments – later commuted to house arrest.

In 1582, when Galileo was just 18, Pope Gregory revised the calendar, as the Julian calendar developed under Julius Caeser was getting embarrassingly out of step with the solar year (it lacked leap years). But the introduction of the more accurate Gregorian calendar that we use today, presented a new problem. The major Feast Days needed some re-calibration. The most difficult one was Easter – a so-called Moveable Feast – and a pretty important one to the Christian faith. It was supposed to fall on the Sunday following the first full moon after Spring Equinox (20 March). While today we just look it up on Google or wait for Facebook to remind us, it was a bit more complicated back in the C16th. You see, the problem was that the Church followed the lunar year, while everyone else followed the solar year, and they don’t quite match up. It was time to find some astronomers who hadn’t yet been executed for heresy, and who would admit to being astronomers… no pressure then.

Genovese astronomer Egnazio Danti (cosmologist to Cosimo de Medici I) was called to Bologne to work with Pope Gregory’s Calendar Commission to help determine accurate dates for the Spring Equinox – and by extension, Easter. He constructed a Gnomon – a sight line – inside the Basilica of San Petronio in Bologne and cut a hole high in the wall to allow the sun to shine through onto the gnomon. This was used to determine the path of the sun at certain times of the year, and help with measuring the lunar cycle too. But less than 100 years later, some renovations designed to expand the Basilica meant that the wall with the hole for the sun was removed (oops)… So in 1655, a mere 20 years after Galileo’s death, Giovanni Cassini was brought in to design a new gnomon in the same church. His ambitious plan was to build a much longer gnomon for more accurate observations. His ulterior motive was to prove Galileo’s observation that the Earth went around the sun, not the sun around the earth – this time without getting into trouble with the Inquisition.

So what has this to do with travel? You can still see Cassini’s gnomon today in the Basilica of San Petronio in Bologne. But if you are visiting Rome you can find another Gnomon – it’s worth checking out the floors in some of these churches, and look for an angled line in bronze running across the floor… There’s also one at the Church of San Sulpice in Paris (pictured below) – made famous by the movie of Dan Brown’s ‘The Da Vinci Code’. 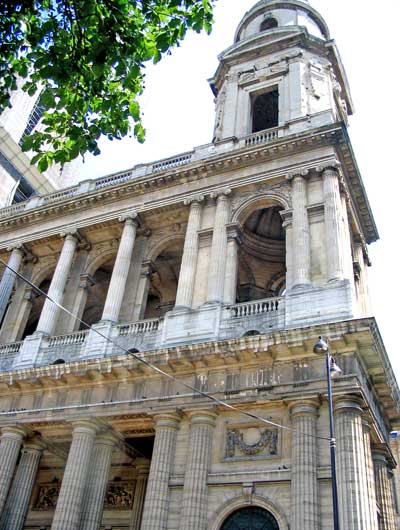 The C16th Basilica of Santa Maria Degli Angeli in Rome was dedicated as a Basilica in 1920 by Pope Benedict XV in 1920. But from the outside, it doesn’t look much like a church at all. Curiously, it was built inside the ruined Frigidarium of the Roman baths of Diocletian (ca 300AD), thus preserving a significant part of the ancient Roman building into the modern age. 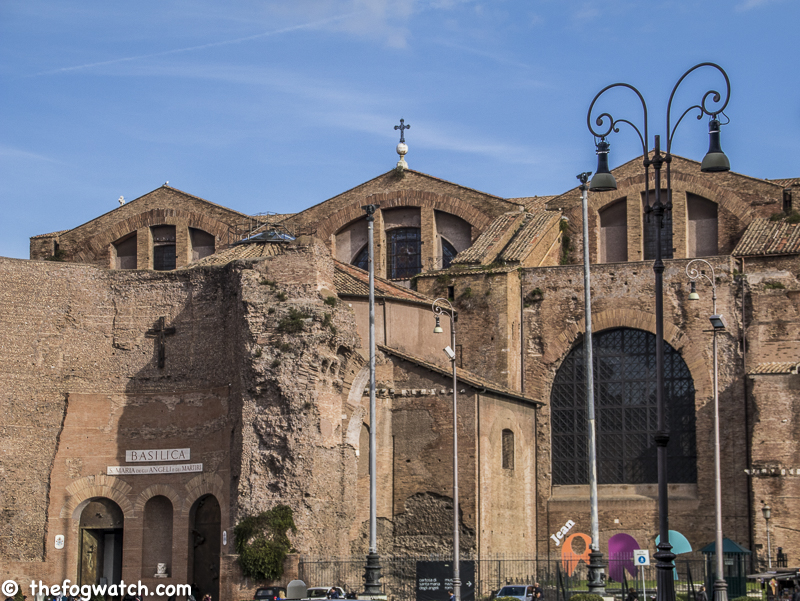 The church itself was designed by none other than Michelangelo. So, from a simple ancient Roman exterior, you enter into a magnificent Renaissance church of breathtaking scale – one of the world’s largest. 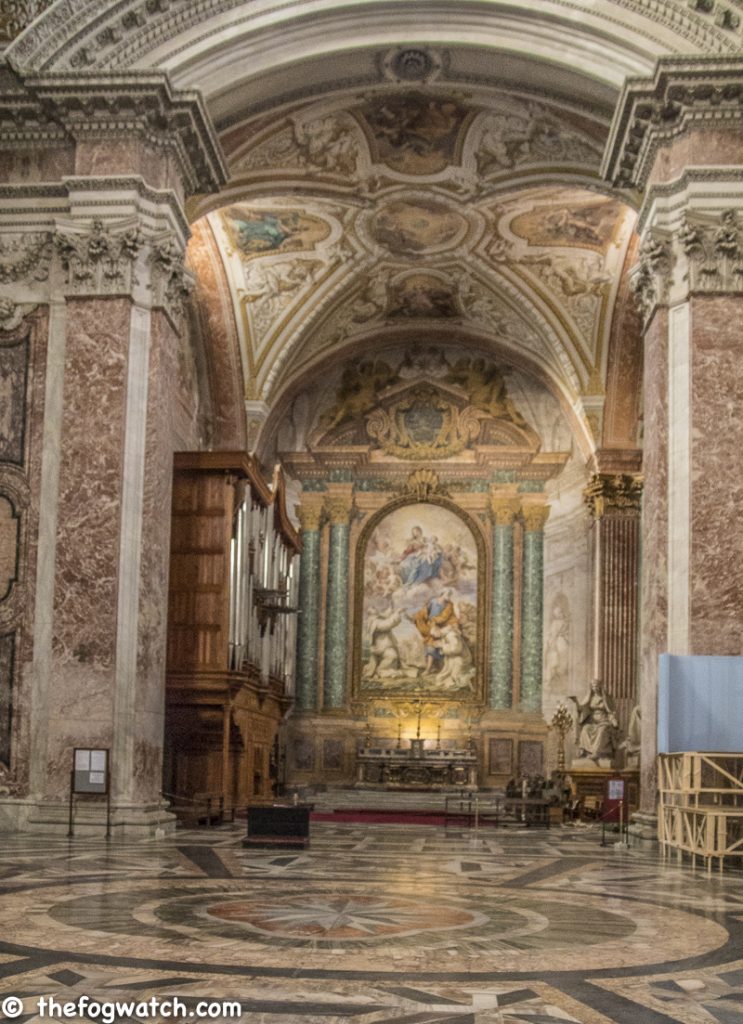 But I had heard that it held one more surprise. A gnomon. The gnomon here was copied from Cassini’s design. Pope Clement XI commissioned the astronomer Francesco Bianchini to construct the Gnomon. Bianchini was Secretary of the Calendar Commission, and h chose the Basilica of Santa Maria degli Angeli because of the stability of its Roman walls and foundations, and because of its height and large internal space. Bianchini improved on Cassini’s design by allowing for the observation of stellar transits – even in daytime. 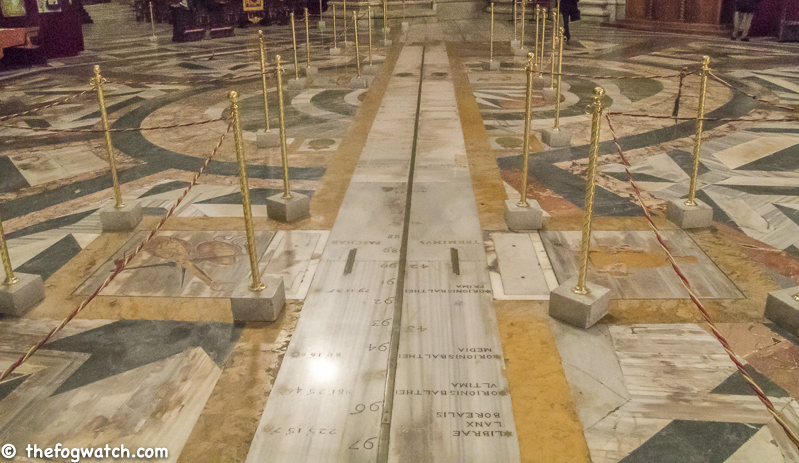 Here you can clearly see the sun approaching the meridian line.

The pinhole occulus through which the sun shines is located high on the wall, and to give it a clear path, part of the entablature and the capital of the pilaster – designed by Michelangelo – was cut away – perhaps a metaphor for the tension between art and science and the church! I have added an arrow to show where the sun enters. 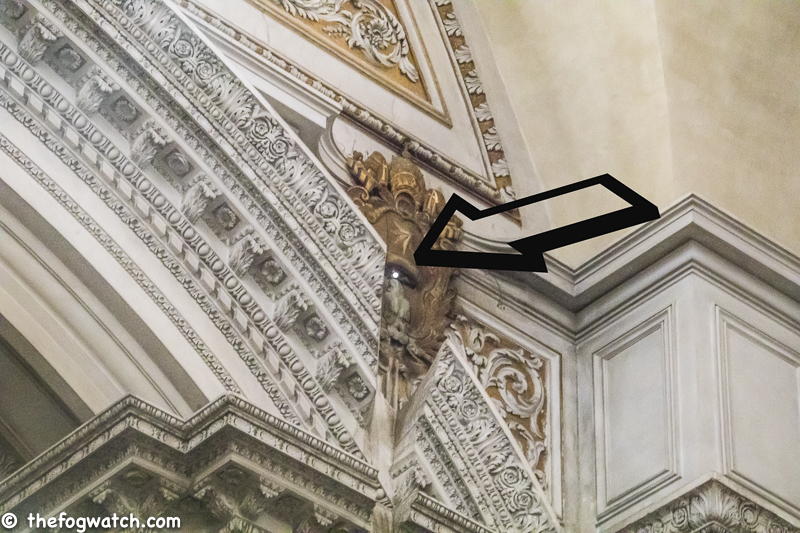 The church also houses a Foucault pendulum which demonstrates the earth’s rotation through the pendulum’s elliptical swing.It was invented by French scientist Leon Foucault, who first demonstrated it in 1851 at the Paris Observatory – it now resides in the Museé des Arts et Metiers in Paris. 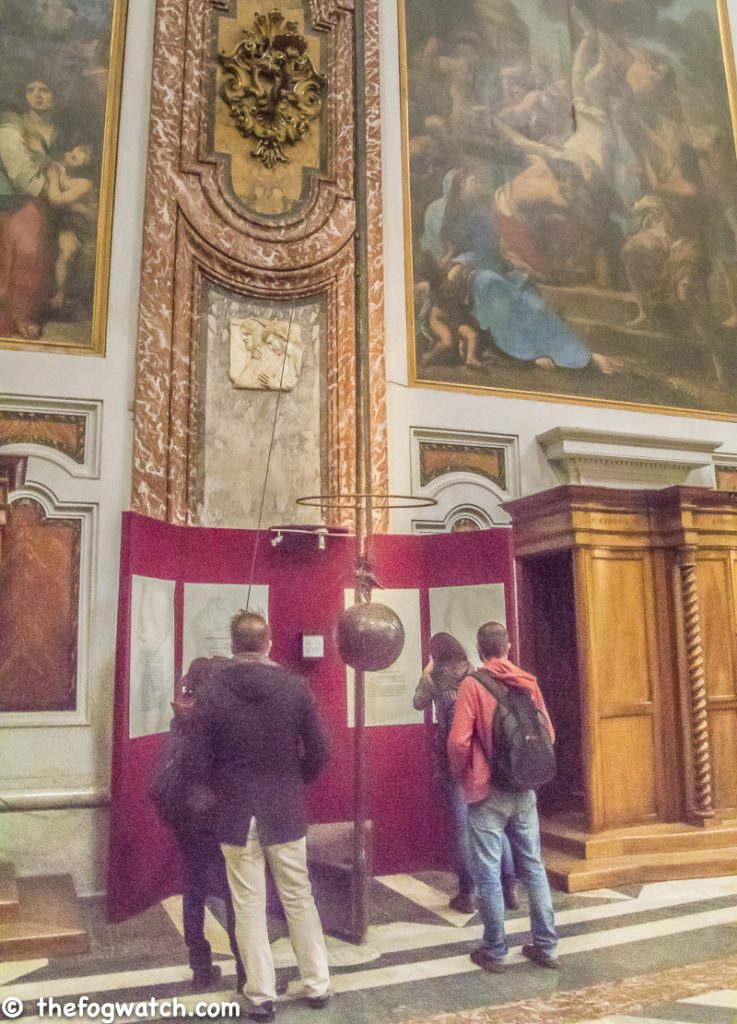 The pendulum weight is in the form of a globe as though pushed with a giant hand. Metaphors for force were quite literal! As you can see below 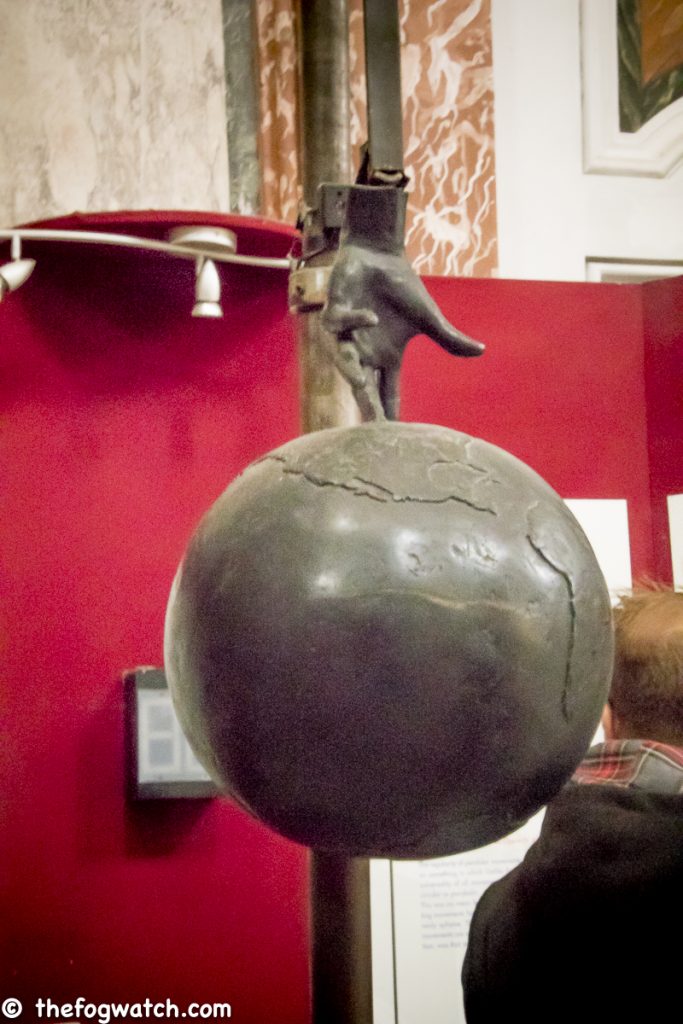 So, from a C16th astronomer seeking to solve the Church’s problem with Easter through detailed observations of the Sun, to a spacecraft providing detailed observations of Saturn we can glean nearly five centuries of the Church’s relationship to science and the arts by visiting a two-thousand year old Roman bath house renovated by Michelangelo in Rome. And all this, from noticing a strange geometric pattern on the floor of a church! It does pay to look down sometimes!