Kuching in the state of Sarawak on the island of Borneo is one of Malaysia’s hidden gems. While it’s not a major transport hub, like Kuala Lumpur or Singapore, it is well worth seeing – and as I was to find out, it is worth seeing through a sketchbook. You see, I was there as part of the Urban Sketchers AsiaLink meetup. For those who may not have encountered them, the Urban Sketchers movement has around 140,000 members worldwide, and each country has their own groups. Their aim is “to see the world, one sketch at a time”. And it is open to all ages and skill levels – which is just as well, as I consider myself pretty much a novice at drawing.

So why should a novice sketcher take a sketchbook and pencils to an international meet-up of sketchers? I’ll let you into a secret – it’s not about the drawing. It is all about the looking. Just as using a camera has taught me to see the world in a particular way, sketching takes this to a whole other level. A photograph might take a couple of minutes to get a good composition and an appreciation of some elements of the subject, but sketching means you are looking in detail at the subject for perhaps an hour or two. Photography has taught me to see, sketching has taught me to see deeper. For example, when I photographed the Kuching Legislative Assembly building (Parliament House), I completely failed to notice the pink inner wall behind the outer pillars. Yet when I sat to sketch it, I found myself taking in that detail. And yes the sketch is pretty rough, but I gained a new appreciation for the building. 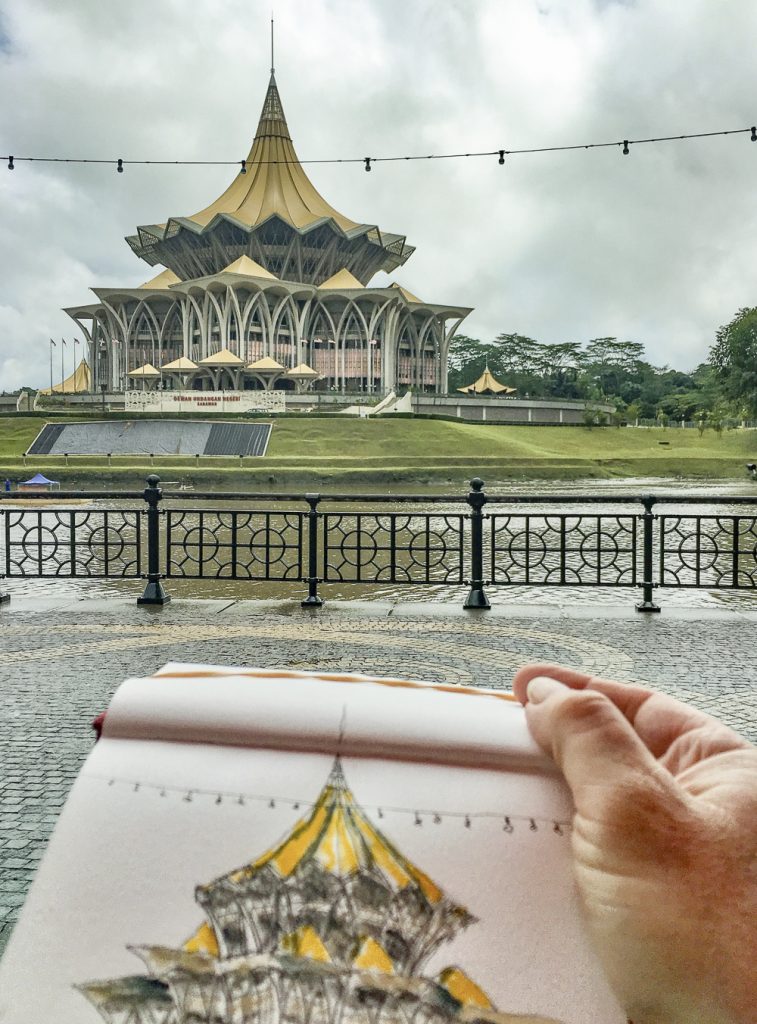 If I could miss something as obvious as the colour of the wall, what else do we miss when we stop for a quick ‘selfie’? Sometimes we see more by seeing less. By that I mean, it is sometimes better to slow down, see fewer sites in more detail, and in the process see more and understand more about those things we do see.

Kuching has a vibrant art scene, reflected in the brilliant and creative wall murals. I love how they’ve incorporated a real wheelbarrow for this barrow of monkeys 🙂 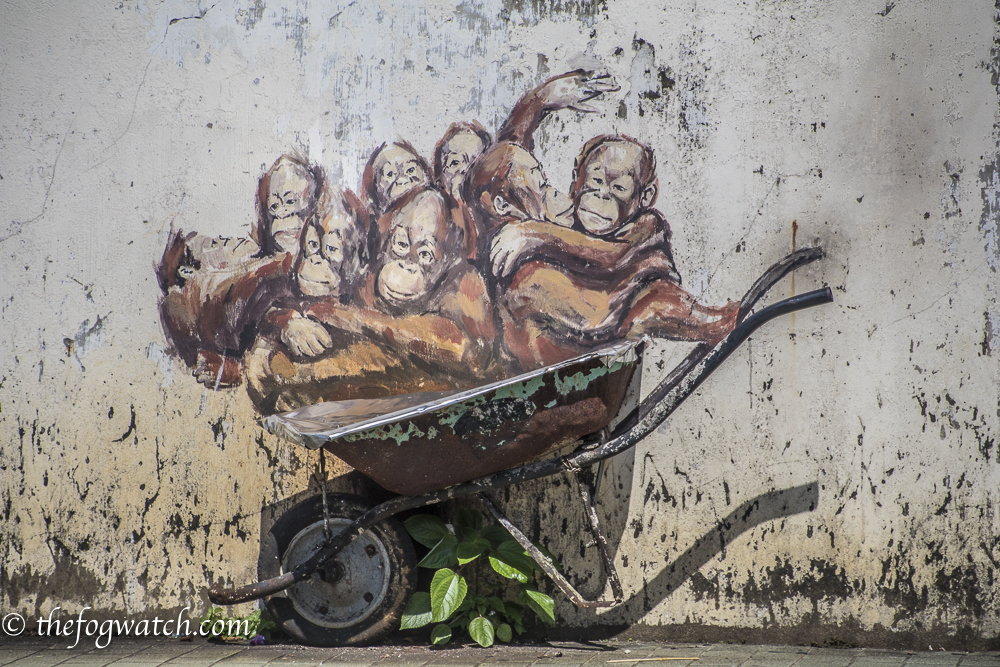 The word ‘Kuching’ is the Malay word for ‘cat’ so the cat theme permeates the town, including a Cat Museum filled with cat-themed sculptures and popular culture references to cats. 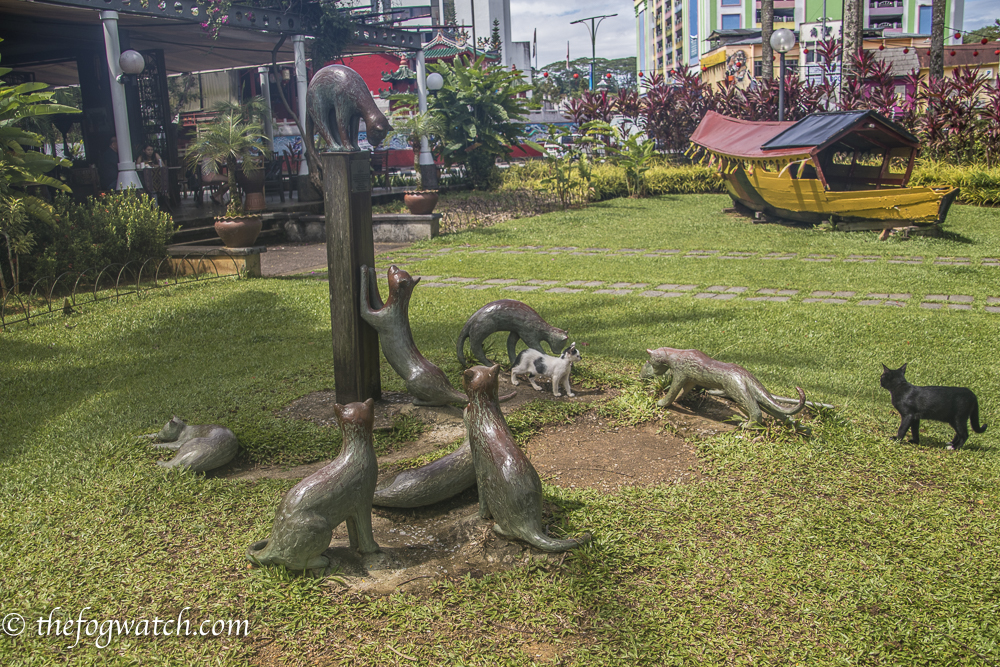 We ate at the bistro several times – great food and wonderful ambience looking out over the river. Here is the view from our table in the evening 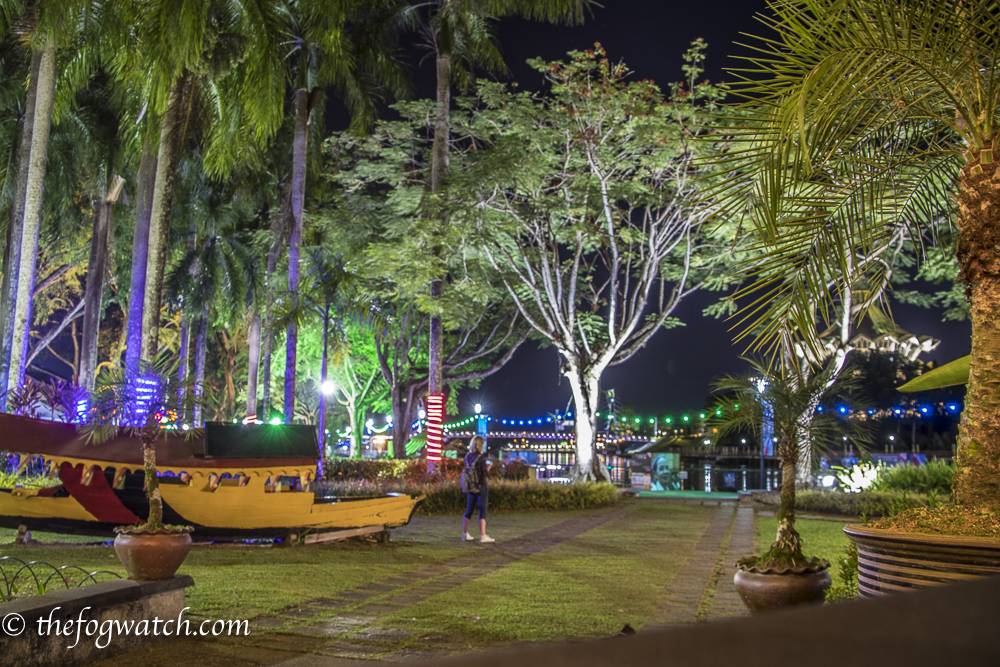 The name James Brooke comes up frequently in Kuching – it seems he was quite a character. Born in India to British parents, briefly educated in England, he returned to India with the Bengal Army. He was wounded in Burma during the uprising, subsequently resigning his commission. With a £30,000 inheritance, he bought a 142-ton schooner – The Royalist – and set off to make his fortune in the Malay Archipelago. The timing was fortunate, just in time to use his ship to help crush a rebellion against the Sultan of Brunei, who in his gratitude, made him Rajah of Sarawak. So James Brooke became the first white Rajah of Sarawak – where he ruled until his death.

The historic Brooke Dockyard, begun in 1907 and completed in 1912 – the year the Titanic sunk – was important in keeping the Rajah’s boats in good repair. The dry dock and associated engineering works are still in use today. On the sketch-walk with the Kuching Urban Sketchers, we were given some limited access to the dock, which is normally closed to visitors.

A group of us hired a traditional Sampan/Tambang to take us up the river, from which we could see the vibrant fishing industry and local fishing villages along the river bank. It was quite something to see the jungle reach down to the river so close to the town. Our boat trip took us up the river some distance, and we were taken to sample the delights of a traditional Sarawak cake shop. The cakes were delicious, though some appeared to be a triumph of chemistry over nature… 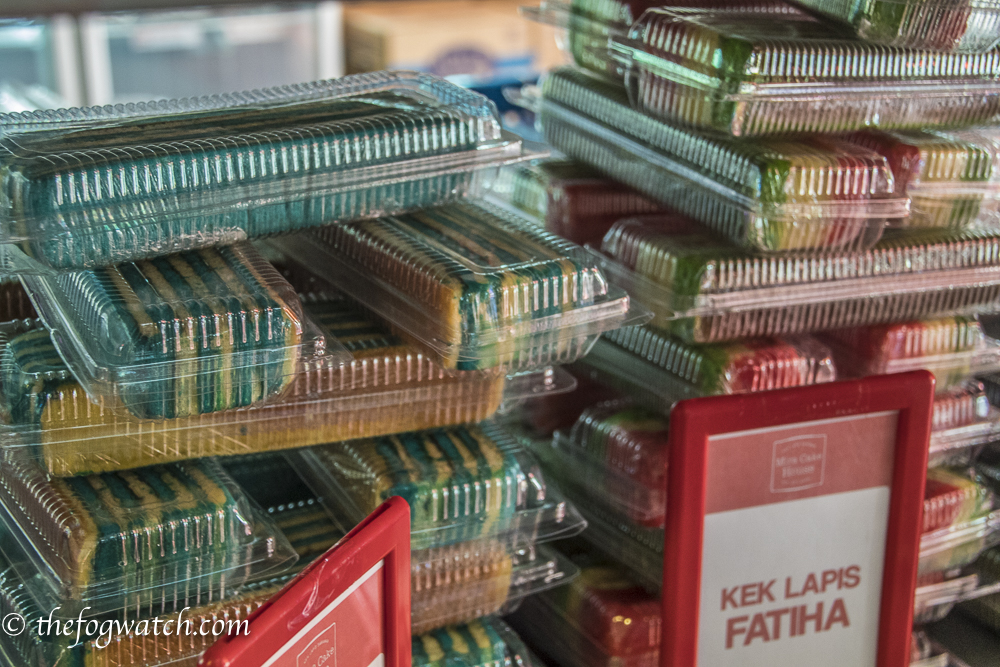 I think the blue and yellow ones were called ‘Michael Jackson’ cakes. We saw variations of these all over Kuching. 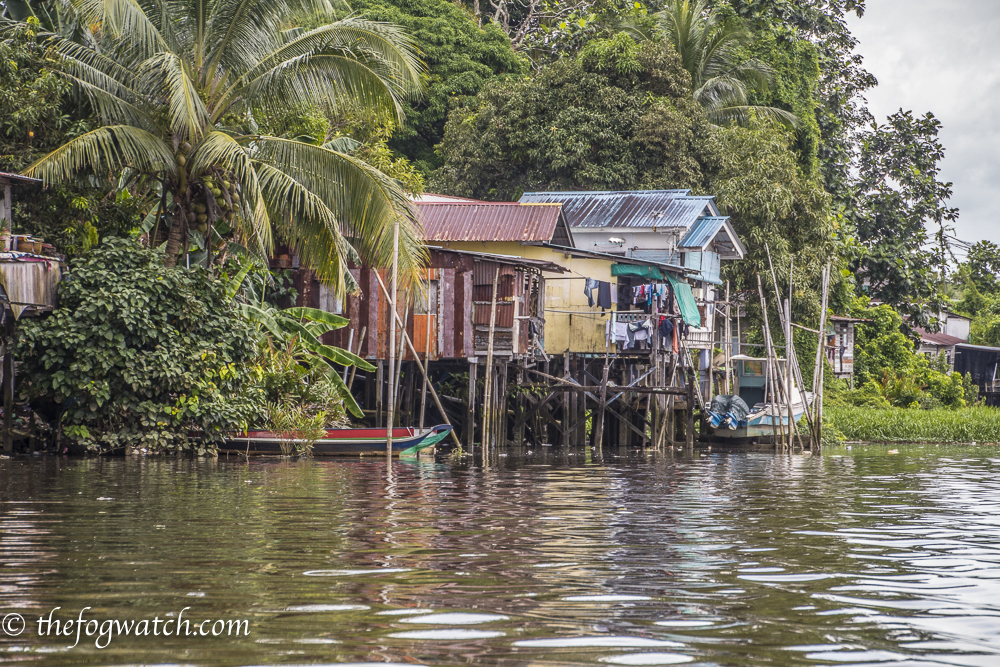 Later we were taken on a sketch-walk through a fishing village on the opposite bank, and on to Fort Margherita built in 1879 – named for James Brooke’s wife. The people live simply, growing vegetables in the village garden and fishing on the river. I don’t know how they reacted to the sudden arrival of some 30 sketchers, but the children happily pointed out which houses they lived in, and took great interest in the drawings. 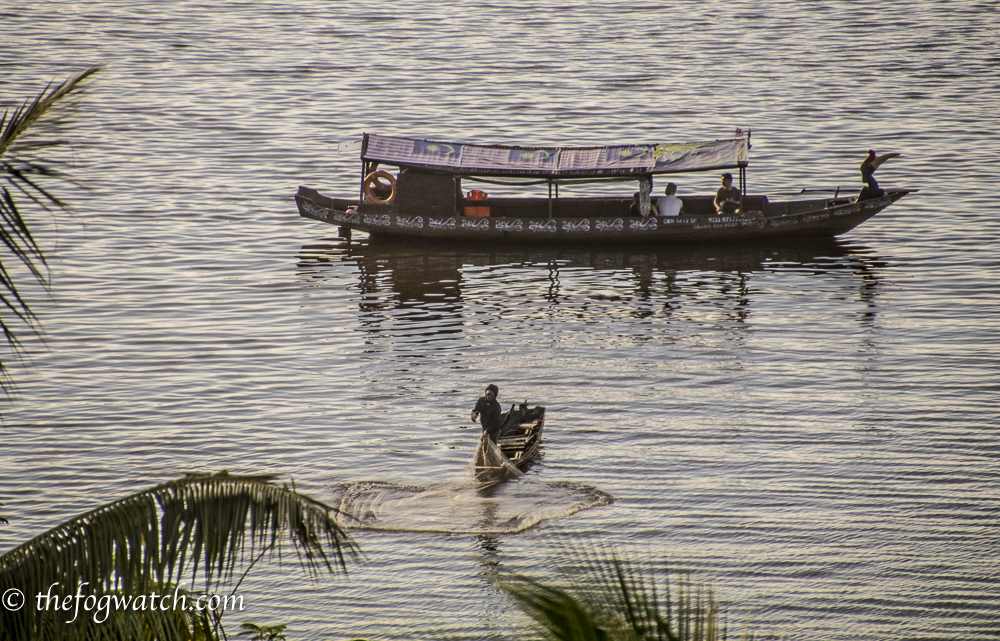 Fort Margherita was built to protect the town from pirates – which plagued the reign of James Brooke and his dynasty. It was subsequently used as a police station. In 1971, it was handed over to the local government and is now a museum – well worth a visit. There is also a wonderful view over the river and the town of Kuching. 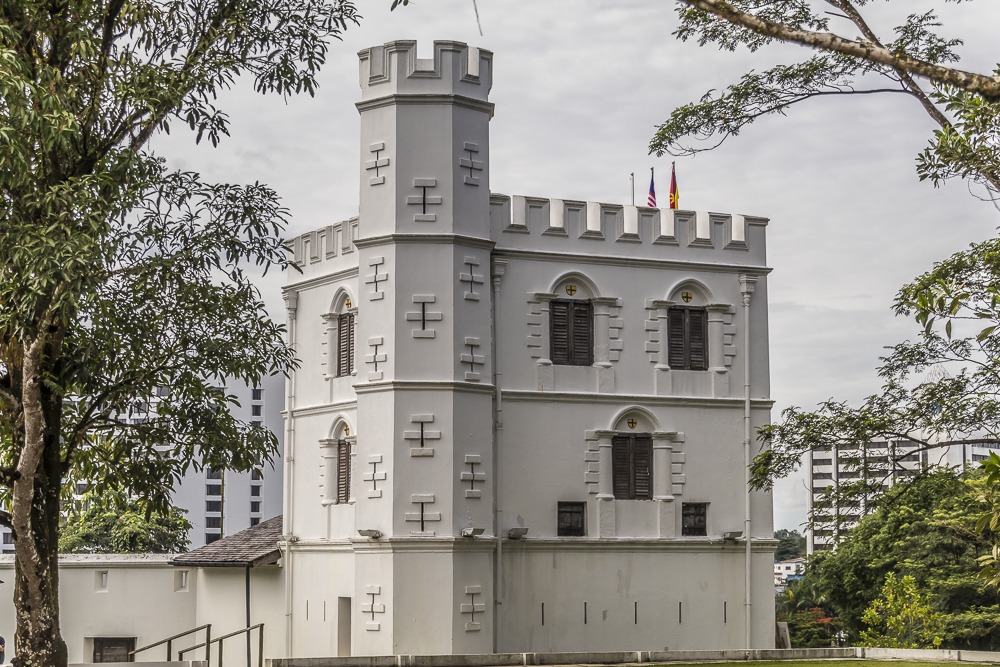 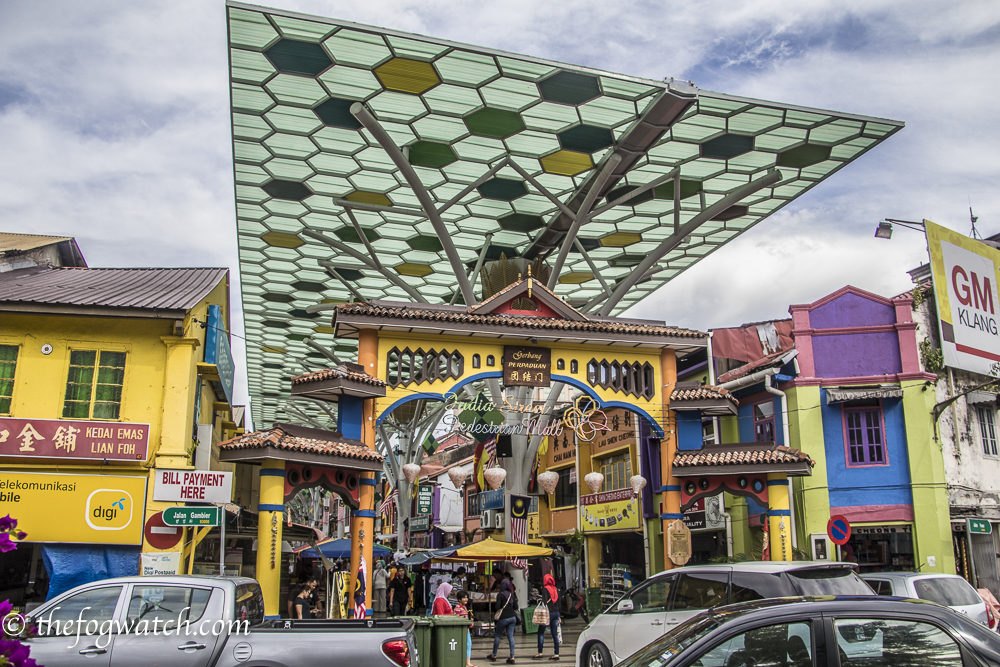 But for me, the charm lay in the traditional shop-houses and the range of goods, both modern and traditional available. It is a feast for the senses – literally – as the smell of spices mingles with that of polished timber, and bright colours and the sound of motorbikes and people and bustle. It is a vibrant town. 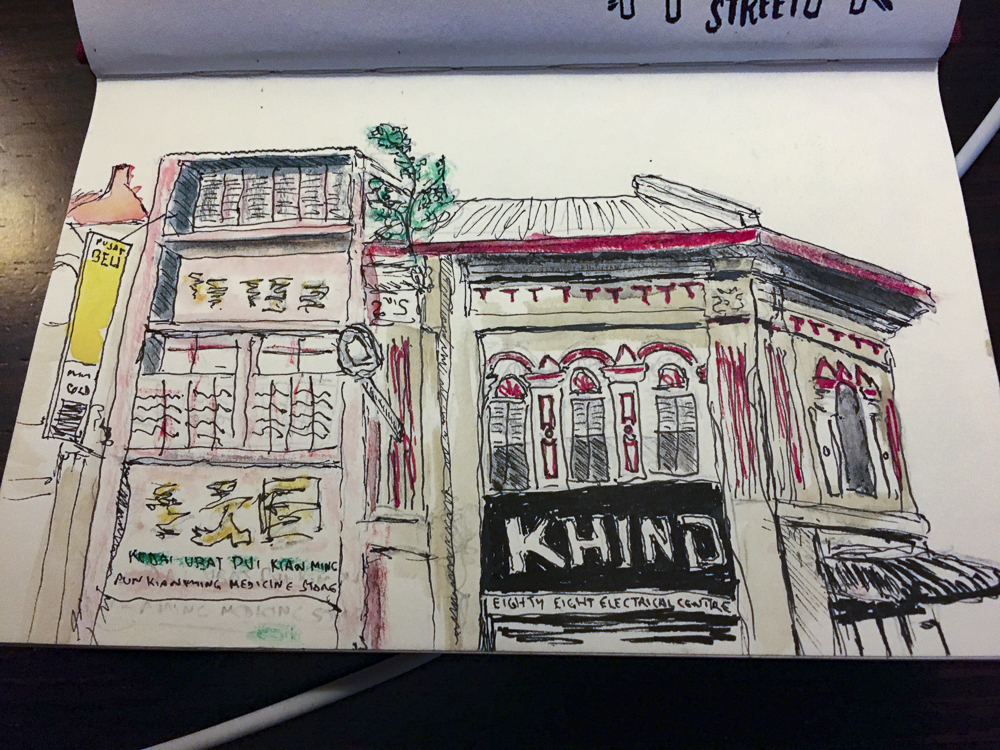 And of course, you are never too far from the wet market where you can buy fresh fish caught that morning and brought in by small boat and barrow. 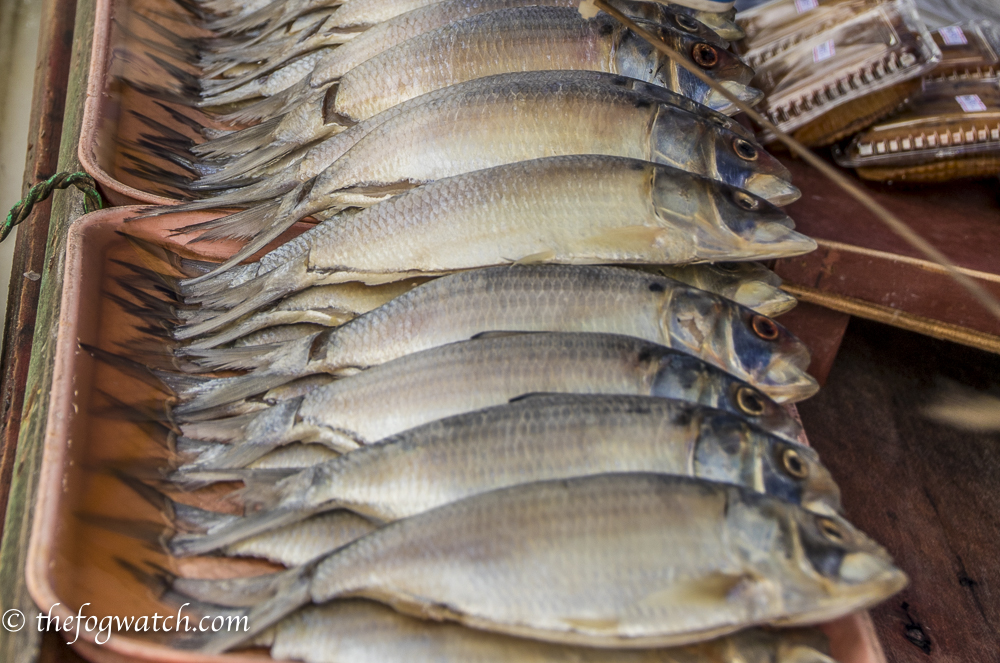 It was great to see the place through the eyes of the locals – they know the best eating places for Laksa and satays, and it was pretty special being led on sketch-walks through different parts of the town, with details large and small being pointed out. And so we got to see the place through the eyes of those who draw it, and in the process, learned to see with fresh eyes, and with greater depth than we would ever have done if we had gone as a tourist, rather than as a sketcher.

Do you have sketchy memories? Why not contact the Urban Sketchers in your local community and see for yourself the delights of seeing a place through your own sketchbook! 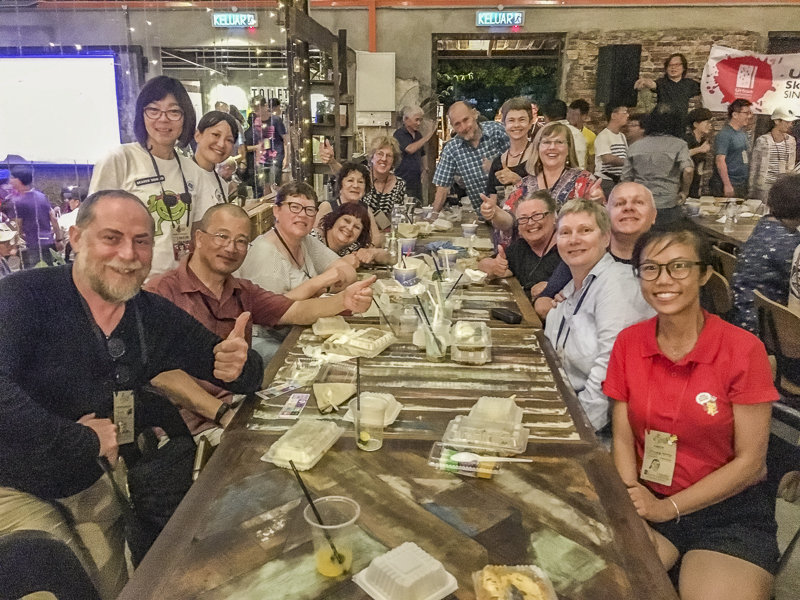 Things to do: Visit the textiles museum, the Cat Museum, the Chinese Kuching museum, see Orangutans (means humans of the forest) at the Orangutan Sanctuary, take a Sampan/Tamban ride up the river, visit Fort Margherita.

I stayed at the Hilton Kuching – but have no affiliation with them and received no free benefits from any of the places or groups mentioned in this post.