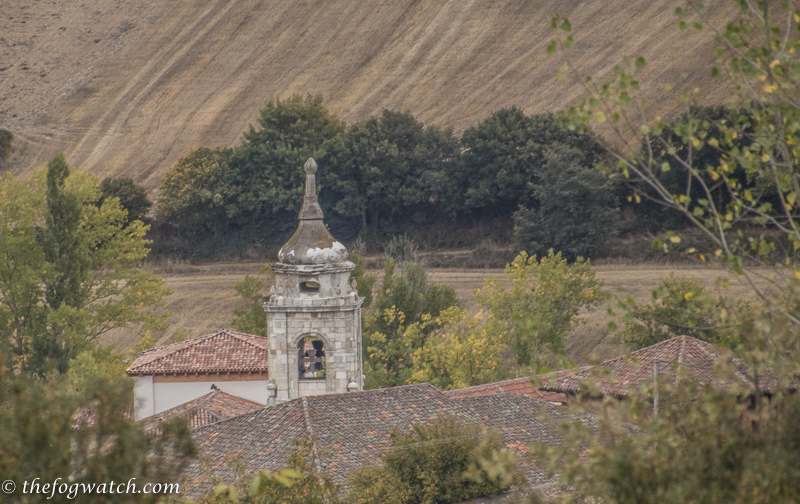 Then we heard a strange sound nearby. Looking over into a field we saw a guy lifting a conch shell to his lips and blowing a couple of blasts towards each of the points of the compass. Perhaps honouring the Dawn, perhaps invoking the rising of the sun. At some point in the distant past, perhaps people thought they had to perform such rituals to ensure that the sun would rise. We called him the Shaman – distinctive in his dreadlocks and feathers – with his young female acolytes hanging on his words. I decided to trust in the rotation of the earth, and its orbit around the Sun, but respected his right to honour the Sunrise – the Camino is for each person to experience in their own way. 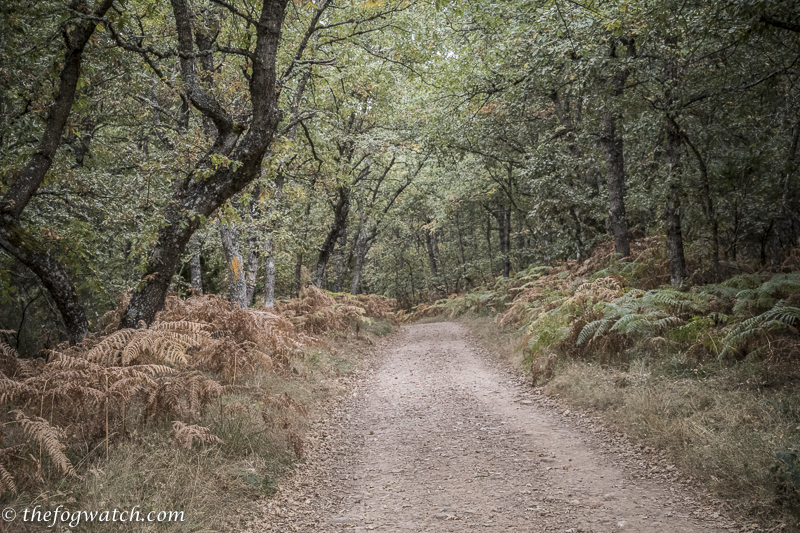 We found a covered shelter for breakfast. The Shaman passed us and called out for us to join him – we declined, but wished him ‘Buen Camino’.

And it was time to continue on towards San Juan de Ortega – it was going to be a long stretch between towns.

We passed the Monumento Caidos – a monument to a mass grave unearthed recently from the Spanish Civil War in 1936. 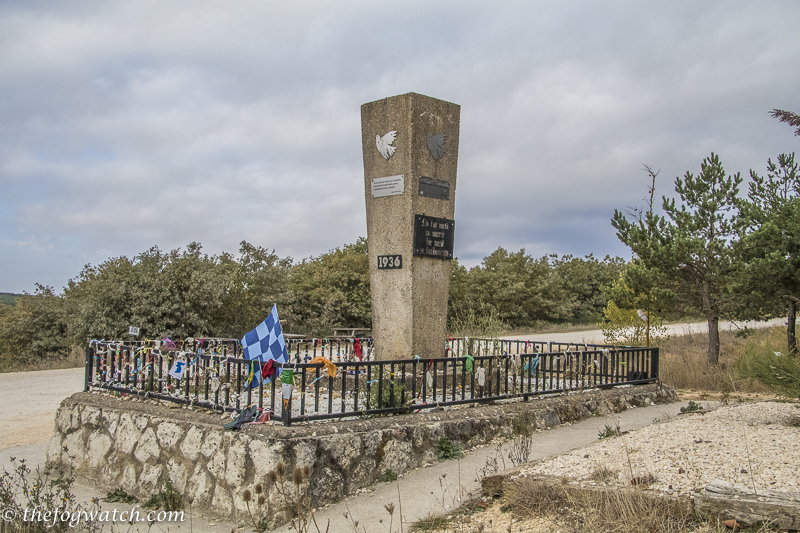 Then we continued on the track through a forest and soon, we saw a hand-painted sign pointing towards a donativo street/track vendor. 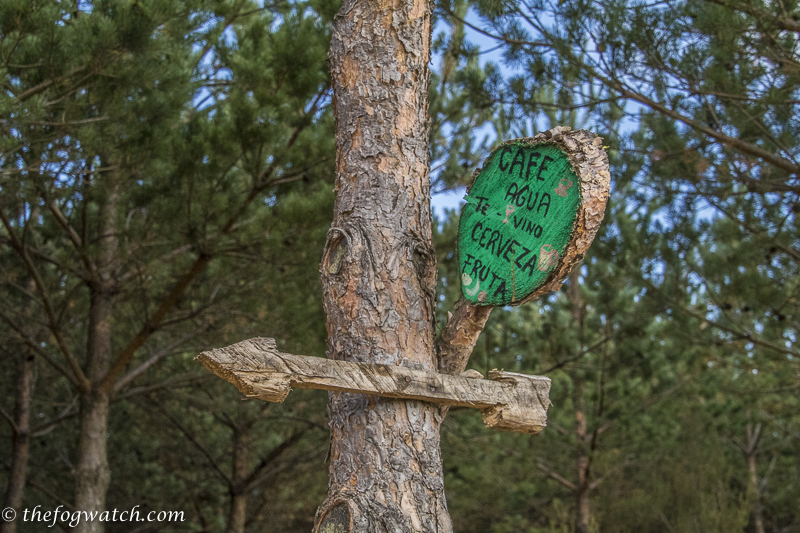 More signs appeared, and we could see painted totems in the distance before encountering what appeared at first glance to be a cross between a Mad Max and New Age camp which was a food and drink stall known as the ‘Oasis del Camino’. 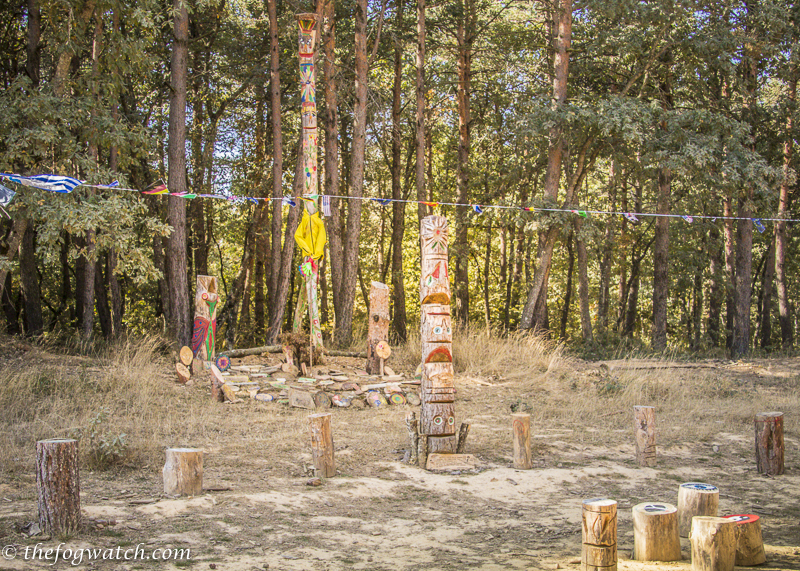 Between the bunting and the totem poles was the stand selling fruit, energy bars, water and fruit juice for the price of a donation. IT is so characteristic of the Camino that this is not abused as far as I could see. People generally donated what they could afford, or well above the market rate as it helps a local person in the context of a country hard hit by the Global Financial Crisis. 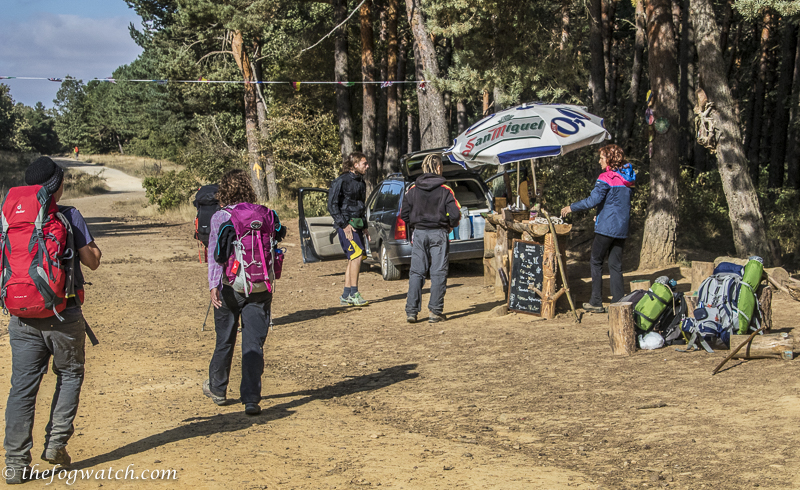 We ate our bananas and moved on through the forest track to San Juan de Ortega.

There was a lovely church there with a 3-bell tower. We stopped for coffee. 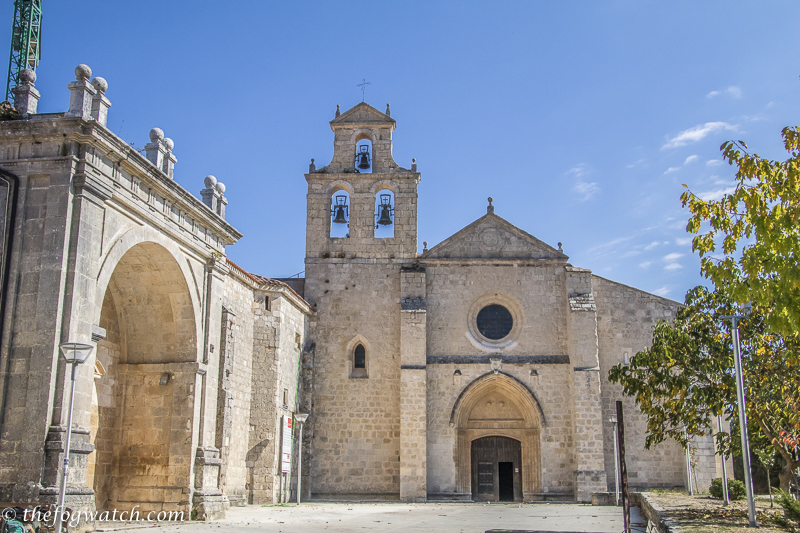 Then we were back into the woodland. 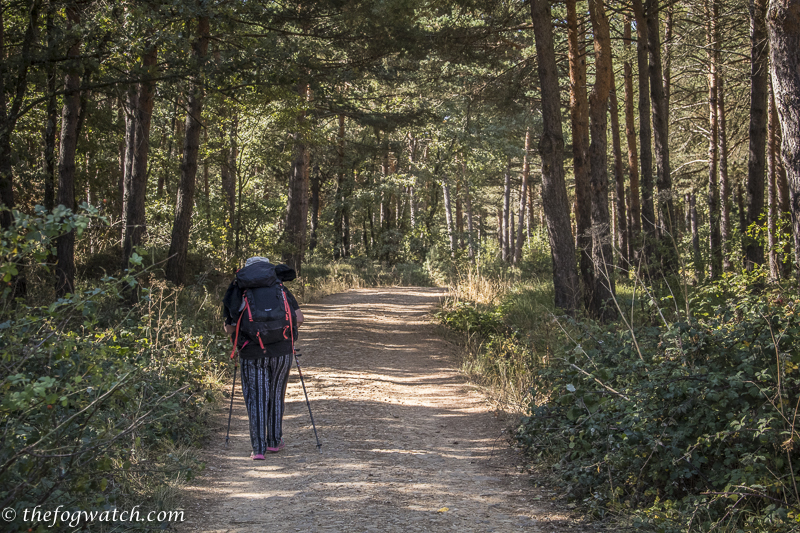 We stopped to feed at a table made from signs to Atapuerca. There was an irony in the crude table pointing the way towards the site of the oldest hominids found in Europe…. 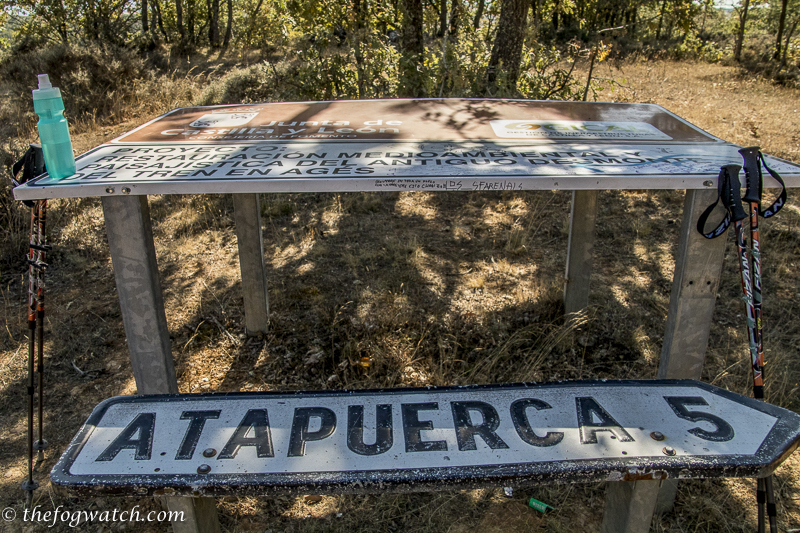 We passed two labyrinths on the side of the path. 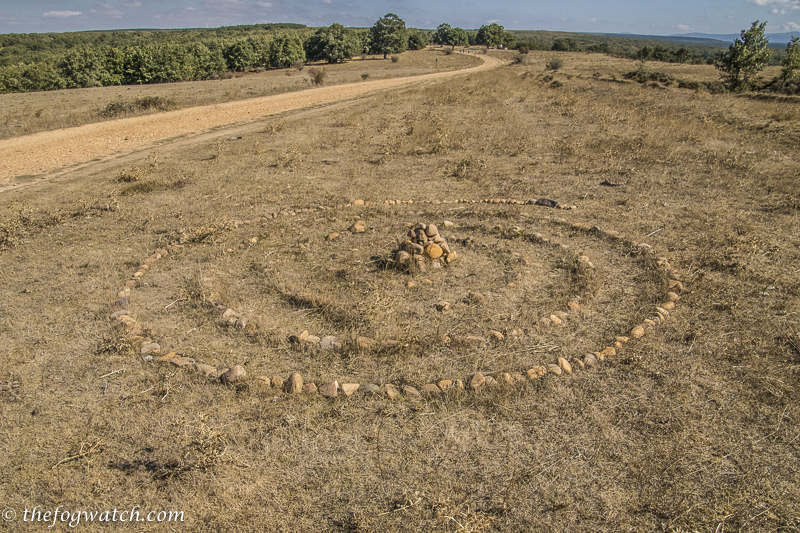 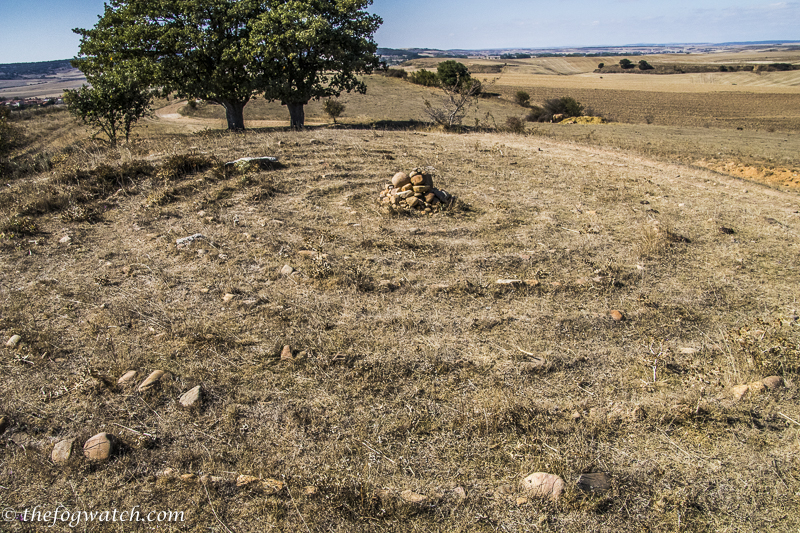 At length, we reached Agés – a lovely town, and we stayed at the Albergue San Rafael. 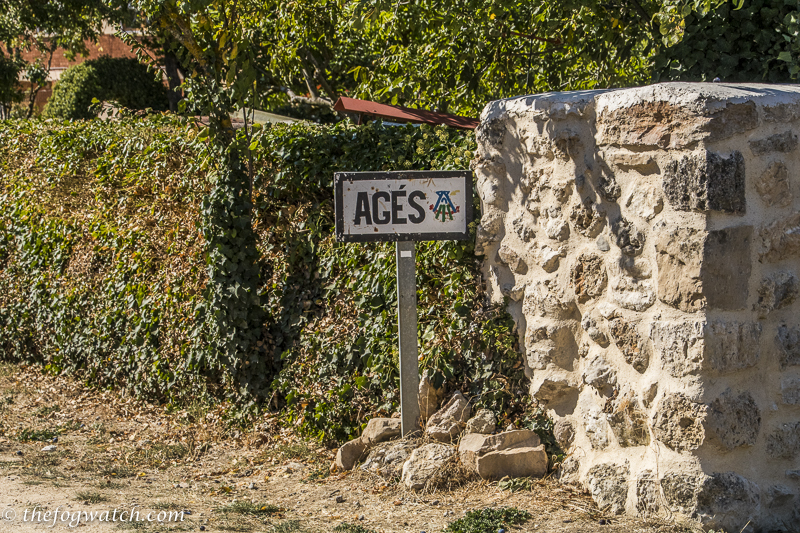 We headed out for dinner at El Alquimiste (The Alchemist) to find wonderful food. As we looked at the menu, a group of pilgrims came in and we invited them over to sit with us. And the discussion flowed freely – everything from where we were from (Aus, US, Germany and South Korea) to the nature of identity. 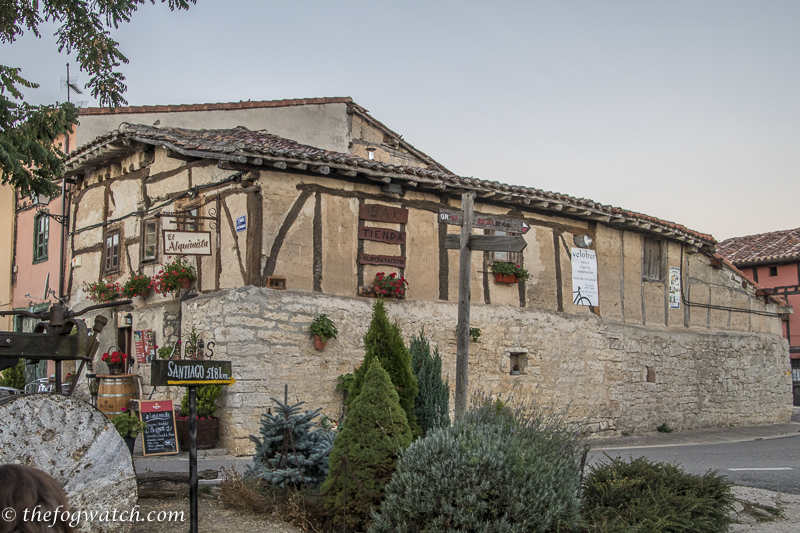 Then it was back to San Rafael Albergue, and so to sleep. 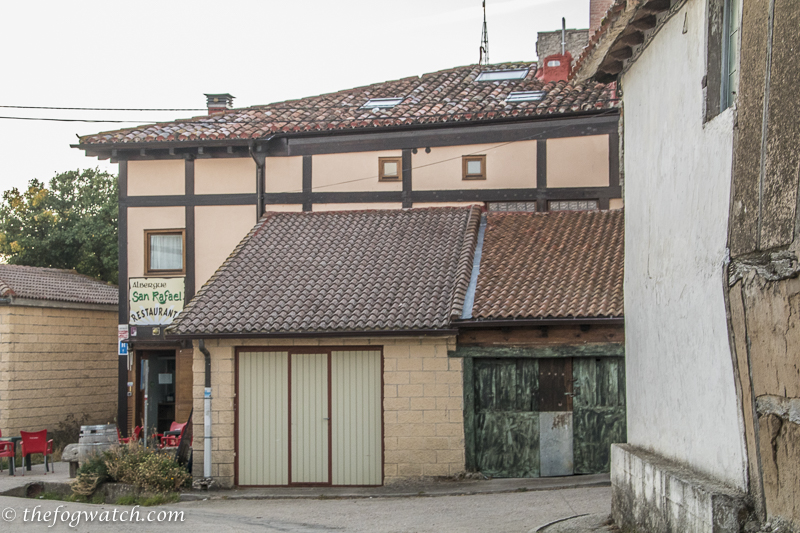